After a hell of a time travling alone by bus with my kayak I made it to the shadey streets of Bariloche. Dave Fusilli and Migule picked me up from the bus terminal and we headed stright south to the nice hippy meca of El Bolson.

Camping there and trying to find things to do We all decided to head back to Cascada de los Alerces on the Rio Manso. Last time I was there after running Bonito the level was off the charts and a run looked like a good quick way to find China, so we were haping for lower flows.

Since the Gol Gol and my ruptured ear drum I have taken awhile off of kayaking. On Ian´s last day a big group of us went a paddled a small tributary of the Rio Michine named the Remeco. It was kind of a mission of two 15-20is footers with about 10 cfs. The day was fun and it was good to get wet again... that was the 3rd of January.

The ear was still acting up so I took some more days off before going to the Palguin with the Demshityz boyz. Jared Sailer, Dave Fusilly, Max and Mike, and Issac a sick group of paddlers from the Yough area down here for the summer.

They were super pumped about watching us run the Middle Palguin on Christmas and wanted to give it a go. Jared went, Mike, Max, and Dave finished their runs off with a flipless descent. (One of the sickest lines ever Dave) 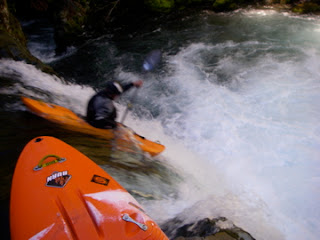 Thanks to the Demshitz the Upper Palguin is now clean and good to go. Photo Demshitz!!!

I wanted to run or seal lanch the portage at the take out but everyone was down to get out of there to go party so I saved it for anotherday. That day came a few days ago and I dry lanch into the center of the two drops and boofed the bottom 20 footer stoked to have not hit anywalls cuz that thing is tight!!!!

Old Greg Only click this link if you are bored because it´s a hilarious british movie about a seaweed man... Strange but one of the funnest things I have seen. Don´t ask why I put this on here I just did!!!

Other than that I spent 4 days in Santiago with Chris Korbulic chasing girls we met on New Years. There has been a few days on the Lower Trancura with Kayakpucon helping with raft or duckies. Fun to get out in the FX 5.8 and throw down some crazy spiny moves. Now I´m in Argebtina again trying to get me and my boat to Bariloche in one piece. It´s not fun bussing with all this gear. I slept in the woods last night not wanting to spend money on a hostel. It was classic EvGar style. But It seems like the water is good down here and we should get some big sweet runs in. Keep an eye on egcreekin cuz things are about to go off.

I am in Santiago Chile right now taking a quick break from kayaking while my burst ear drum heals, and I was just replaying the year of 2007 in my mind. It was with out doubt one of, if not the best year of my life.

The year started out with my travles to the Yunnan province of China and my last semester of high school. Salween Update Click that and check the other 5-6 updates I had from China, it was a tough trip for boating but overall a learning expirence and a truly amazing journey.

After China, came just the begining of my Cali season. I spent a solid month with Wcka there running some great classic runs with tons of good friends. Dave Zinn, LJ, Polk, Billy, Justin, Petey, Sweden, Stork, and all of my hommies who held it down with me for my senior year. Cherry Creek Update Thats just one of the many runs we did with school

Then the World Champs epic times up there in Canada with all of the freestyle crews from all over the earth. Worlds Update There was my update from there. I cant believe I took that thing. My warm up was not Africa like everyone else. It was Chilly Bar in Cali some nice low volume class III:)

Then I finished high school... every little kids dream. The next day I went to Cali. Cheers Bra!!

The high lights of Cali were the Dinkler with JPatt, the two of us routed that thing so fast and solid it was incredible!! For Sure filming with YGP was up there, cant wait to see the Source. Thnaks Rush for giving me the opertunity to be apart of this. As well as my time with the Kiwi bros. Upper Cherry with the Kiwi crew They have to be some of the best boys to go road trippin with ever! We hit sooo many runs back to back to back to back... etc! Josh, Sam, Sean, and B-unit.

My best overall memory was meeting up with the crew of crews and blitzing out the most notoious run in the Sierras... Devils Post Pile!!!! Three days in one of the most committing canyons slicing the entire way through the Sierra mountain range. So epic with so many good people. These photo are by Darin at jscreekin.blogspot.com: 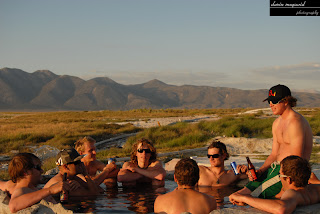 All the boys kicking it in Mammoth hot springs before Devils Post Pile this June. 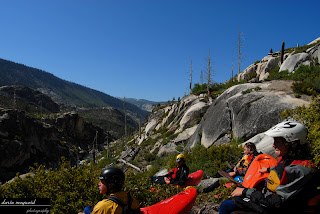 Ty, Tay, Ligare, and Me at the top of the biggest, longest portage on the Post Pile. 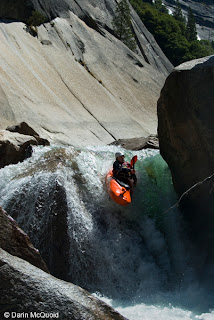 EG himself with the last stroke to freedom on the final drop of the Crucible gorge. 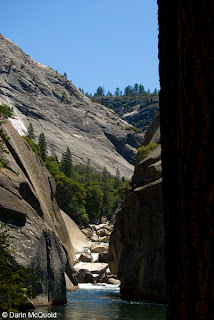 Looking back up the Crucible after completing the committing maze of whitewater.

After that was a sick unforgetable trip with my best buddy Cheese (Ian McClaren) from Idaho. We went to hood river and stayed with the dude at the Bever Lodge with All Star rafting. And then hit BC for some epic Skook and big waterfall hucking.Cheese on Sutherland Falls Good time with Austin Rathman and tons of other folks including Dem Shitz boys as well. A good Tatlow week with Lane Jacobs and Clear H2O boys Ben and Jeese ended my time BC. Wheeooo! Theres more!!

Tyler Bradt, Rush Sturges, Brooks Baldwin, Rafa Ortiz, Charlie Center, Todd Anderson, Lj Groth, Me, and Ian fired it up huge in Mexico for around three weeks. Man it was the most epic pure kayaking bindge ever, maybe second only to Cali but it was up there. Truch Section Update This had to be one of the most memorable dayz down there to say the least. 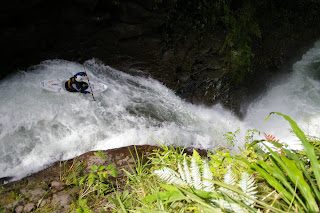 Me on Truch Falls by Lj.

And now I ended the year with the begining of my Chile trip. So good thus far. Had a few 70plus footers down here already. Had so many good night on the town in Pucon with good friends and spending time with all the Pucon hommies has been so good.

Thanks to everyone for such an amazing year. I made so many friends, and did so many amazing things last year. It was all because of you!! hope to do the same in 2008.