Bomb Flow TV turns its sights on to the North Lands of British Columbia once again! We avoided the normal Cali siphoned and boofed north from Hood River and Montana to BC. What we found was Substantial!!! Spring provides high water on BC’s already cold, unforgiving, and dangerous rivers. Hitting much loved classics and finding some gems tucked away in the frozen mountains we are stoked to bring you BFTV Episode 10!!!! Enjoy Later E.G.
Posted by E.G. at 11:20 AM No comments:

This is a 5 minute edit that I made for The Kayak Session Short Film Awards!!! Half of the competition is online hits so help a brother out and share this on all your social networks, blogs, websites, and with your friends!!!!

This is a short story about running the 5 big drops on the North Fork of the American River in California. I first completed this feat in 2010 and then repeated in 2011! It was an amazing thing to be able to put on this powerful river and take out having completed this goal I had for so long. I dubbed the run, “The Royal Flush”.

The Heath Springs Gorge (Huge entry set into a 40 footer, a clean 60 footer into a slot 20 foot boof, then a committing class V canyon run out)

Scott’s Drop or Chuck Kern Falls (A 100 foot double stage falls, the crux of the run)

Running all 5 big drops in one descent had been talked about for a long time...I have run the Royal Gorge 5 times now and it took me 3 runs prior to my 2010 Royal Flush to put it all together into one successful descent. It wasn’t an overnight stunt by any means. Of course it’s all about picking the right flows, group, weather, gear, and time to go for this descent...when it all lines up it’s one of the most incredible things I have ever been a part of to this day! I would suggest 900-700cfs @ Inflow to Clemintine N.F.A. river as the proper flows to run everything! Now Watch the video and enjoy!
Later E.G.
Posted by E.G. at 9:48 AM No comments:

First and foremost I’d like to say that the last two comps have been 2 of the best most fun I have ever been a part of. So thanks to Capo of World Class Academy and James Byrd for putting on such cool down to earth events for us.

The Little White Salmon is a place I hold super close to my heart and I have spent more time on this river than almost another in the world. I have had my sights set on the LW race for a long time now. Years ago I hurt my shoulder on Metlako the day before the race. Last year I had a slow partner haha jk ;) However this was my year...I decided to race with Isaac Levinson from Atlanta, GA! I have know Isaac since the spring of 2009 and we have shared some super good and memorable times all around the world since then. He is a slalom paddler, which means he’s fast, but is also easily one of the most talented kayakers around!

With all the time I have spent in White Salmon this spring I was pretty solid out on the LW, and we had been running the river up to 4.7 feet! So the race levels were chill and fun in comparison. After about 15-20 laps in the 2 weeks before the race I had the lines dialed in and was in shape. The day of the race came and there were 27 teams of 2 racing! That was a huge step up from last year at 13 teams (I think). So twice as big of an event and way more organized we set off for Willard and the Put-in of the LW. Teams went in 3 minute intervals and Isaac and I were the 25th team to go. We went fast had smooth lines and Isaac was behind me giving me little quick...Go Go Go’s on the way down the river! Through Getting Busy, Boulder Hoose, Island Drop, Sackers, Double Drop, S-Turn, Bowies, a ton of in-between water, and then we came into Wishbone and the finishing line hot...It was cool to boof the perfect 15 foot falls and see close to 70+ people just chilling on a river I rarely I company on! We were beatdown!!!!! People started the rumor mill and said that we won...I didn’t claim at all because I know how that stuff goes! We all bombed down the rest of the river (Which is for sure the hardest part) I can pretty much say without a doubt that Spirit Falls had by far the most runs in a day that it has ever seen...and it lived up to its stories. A bunch of people swam, a broken nose, lots of gnarly Chaos action! (Chaos is the substantial slot drop right below Spirit falls with a terrible recycling eddy hole at the bottom) Overall it was a great day and everyone came to the take out stoked and ready to party this night away! In the end Isaac and I did take the honors and all the cash ;) A dream come true for me to compete super well on my favorite river! I had my sights set for a long time and I’ll be back to go fast for years to come! We had a great party way up in the woods and the LW Race 2012 was a huge success! Thanks Capo. Check out the results and some pic... 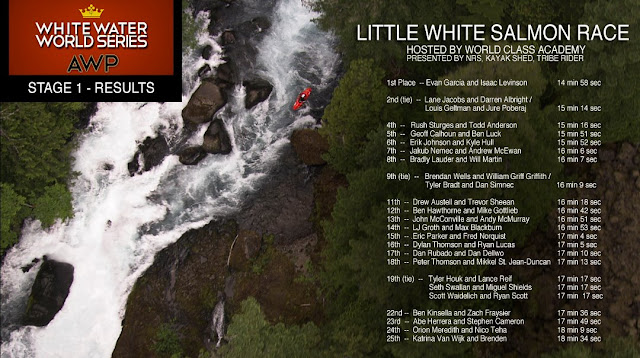 Ok, can’t wait until next year. I’m sure the competition is going to be even more stout and the field even more stacked than this year, which is saying something! Once again a huge shout out to all the people who made it out, helped out, showed respect and support!!!!!