Cherry creek is one of my new classic favorite runs in the world. The flow was around 1400 cfs at the put in and 1800 at the take out. The water was a bit chilly but it was a beautiful sunny day and about 70 degrees outside. The water level seemed perfect to make everything soft and padded. 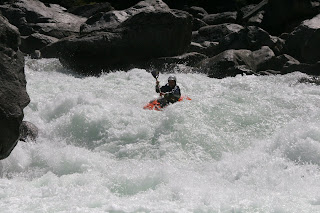 Me dropping in to the last drop of Mushroom rock rapid. 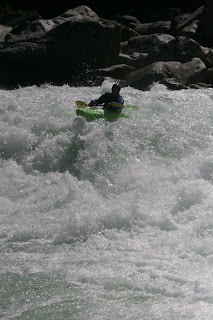 Billy Boylan at the same spot hitting the move to the right to avoid the big hole.

The run was full of good drops with big holes and sick boofs everywhere. The run surprised me quite a bit. I was stoked to get on something with lots of water and gradient. The best drops were Mushroom, Lewis's leap, and Lumsden Falls.
I was a little nervous to get a look at Lumsden because of all the stories of the rapid being huge and V+ and sketchy. We ran the Flat rock rapid and took a look at the beast. Justin Patt and I ran it and both had sick lines to finish a great day of boating. 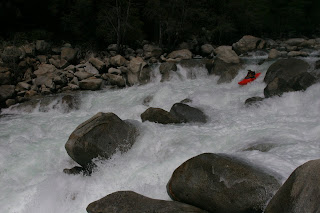 Justin dropping into the top of Lumsden falls looking good and staying left. 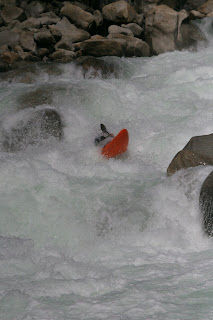 Me in the mist of the biggest rapid of the run. One of the best and biggest boulder rapids out there.

The rest of the run is maybe 1.5 miles of class III-IV until you reach the take out. A great run which I hope to do many more time this summer. Now we are at the South American and hoping for some south silver and golden gate. Later E.G.
Posted by E.G. at 10:17 PM 3 comments: 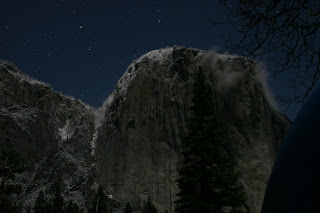 A mid-night shot of El Capitan by Justin Patt we showed up late at night for some moon light photos.

We continuously lapped Hospital Rock for a few more days before getting a little interested about what's upstream of the put in. The Upper Middle for the Kaweah, which was first D'ed by The Kerns and Polk Deters, not Lingren and his crew in the summer of 2001. A little fact not told in Burning Time II.
The road was closed from H.R. up to the Buckeye campground so we hiked a short 1.5 miles up above Chuck's drop and put in after hiking threw a massive forest with a ground layer of poison oak. The first drop we hit was a cool slide with a auto boof at the bottom, followed by another 1/2 mile of fun steep drops. We walked Chuck's drop, that thing is burl at any flow. I thought it might look better than it did last year, 2000 cfs @ Three Rivers, but to my surprise it looked possibly worse. A lot less padding for the rigged rock.
After Chuck's the valley opens up for some cool sliding drops down to the put in of H.R. The best drop on this section is called "Takin it to China" a slide into a seam which will send you deep if you hit it right. 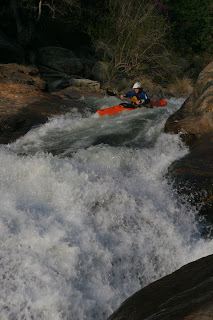 Entering takin it to China with some afternoon light. Photo@Justin Patt 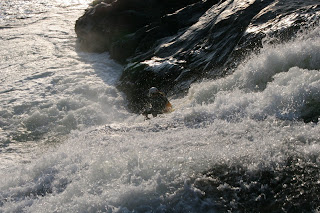 Polk right about to try and take it to Asia. @ Justin Patt

After getting down to Hospital Rock we picked up Glenn Daggle and routed down the classic one last time before heading down further south to Kernville. We almost ran 0 to 60 in the dark but luckily we went fast and got to the take out right as darkness fell.

Kernville was a bust. We did Brush creek at the lowest flow ever, which did nothing for me. The group also did a class III-IV section of the Kern river at low flows as well. The only good part of that was hitting the 80 degree weather down there by LA. It didn't last long. Before we knew it flash backs of China came with the falling snow and we packed up and headed for the Tule. That was a bust with only a 100 cfs we opted out of running it and drove to Yosemite to enjoy the freezing temperature and a day of hiking.
Posted by E.G. at 9:44 PM 2 comments:

We spent the last two days on the Middle Kaweah running a good section named Hospital Rock. Fun classic California class V run. Speaking of hospitals Alex Daggle, one of the twins, dislocated his shoulder on the first slide of the run. Both Daggles in one year aye!

This drainage has tons of different runs to get on. The East fork is also running, on the low side of good, but it would still be a dope day on the river. The river is fun with tons of cool boofs and slides. It starts in the center of Sequoia national park in the southern Sierras. The entire run is continuous and butter smooth. The best drop is called zero to sixty. Which is a cool smooth slide entrance into a 10-15 footer at the end of the run. 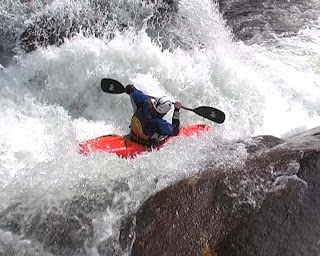 Dropping in to the second slide of the day, tuber. 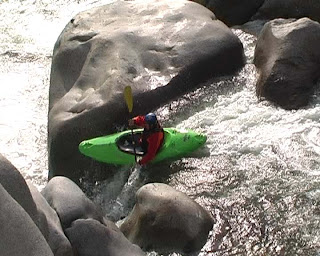 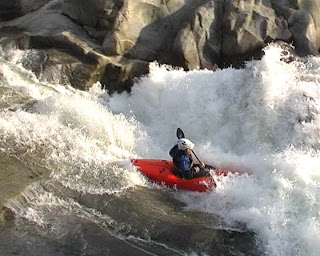 The pillow heading into 0 to 60. New shinny boat 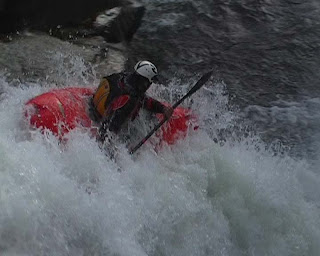 The first two days here we had 80 degree weather. Today it rained all day but the level was still holding. Cali should be treating well the next month so I will try to stay updated on what I'm up to. Take it easy y'all EG
Posted by E.G. at 9:01 PM 2 comments:

After we completed the upper sections of the Nu Jiang river we moved down stream to a small Chinese village where we spent the last week of our trip boating the best whitewater yet. We had a 8 km long run with t ons of sick play and big rapids. The best wave we found on the Salween was given the name Dredger, due to the Chinese boats with cables suspending across the river in both of the eddies. The wave has a huge surging right shoulder and solid foam pile. We sessioned that spot for a few days before heading up to the run to drop into some big holes. 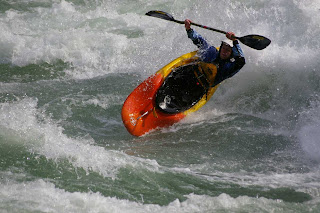 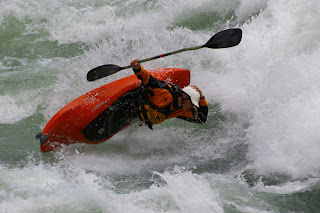 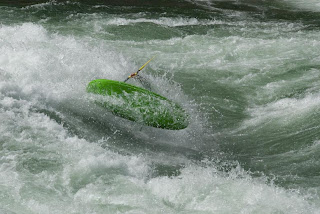 The run had 7 bigger drops on it, including 2 great hole punches. The last rapid was just two phaty holes you had to charge through. 9 runs on it 9 surfs. It was a goodie. 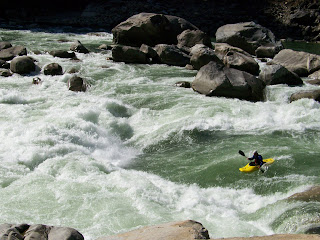 Polk Deters on the top hole of the last big rapid of the run. Look at the focus and determination, he's fired up like a spider monkey high in the canopy looking for dinner, if you know what I mean. Photo@ Alex Daggle.

After the last day on the Zen Wave run we started our 4 day travel from the Salween home. Lots of bus rides, planes flights, waiting in airports, and a sleepless night in Washington I made it home and back to the great land of American food, blound women, and sitter toliets, it's a beautiful thing. I be heading to California in a week or so and I'm ready for some good hard creek boating to wake me up from my China trip.

after returning from our nilahue mission i looked on the internet to see that the other part of my group that had gone south to the rio baker was having an epic time with perfect waterlevels and the monster take out wave surfing perfect. damn. but it wasnt that bad i had run multiple massive waterfalls and been enjoying every minute of it. 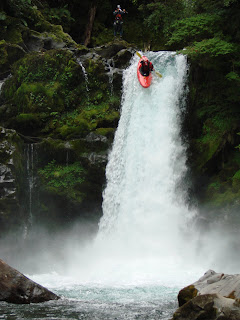 the first is from the middle llancaghue river that has been looked at many time but still has no takers just the first 60 footer and this perfect 30 footer that we ran. that same day we also made it to the rio fuy and looked closely at salto de la puma a huge 80 footer that is runable but the entrance was just a little to stout for any of us to be the first taker. 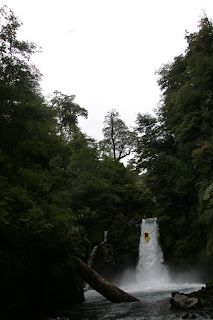 then a few more classic runs brought me back to the middle palguin for a second run on the 70 footer that we first decented two weeks ago. the down fall came as my paddle exploded and i took a swim. not to bad and always good to put you in check. 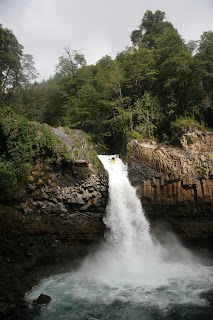 after myself gerd sarrasoles gave and his paddle broke as well. another expensive day, but all in good fun. but here are some more photos from the last couple weeks. 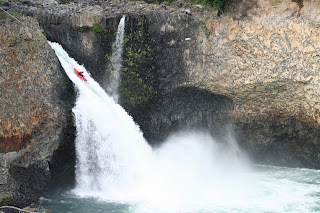