Fear canyon of the Elaho 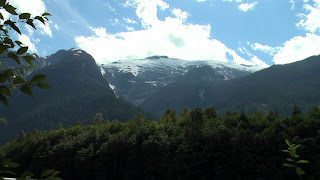 Checking the glaciers on the way up to the river.

Fear canyon is a fun big water run that flows in to the Squamish about 20 miles past the Ashlu river. It is a short but pretty dam sweet set of rapids. The last two drops are the biggest and best of the run. 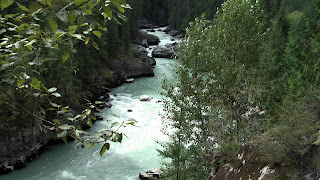 The last rapid coming out of the box gorge. This rapid reminded me of a mini version of the "BET" of the Homathko.
Posted by E.G. at 8:48 AM No comments:

We got the first run of Tatlow creek of the year, hurray!

After a cool but long adventure on a middle gorge section of the Big Silver Creek we talked to Austin Rathman who told us that Tatlow would be prime the next day... That was enough for me to sack up get some Cafine and drive all the way to Mamquam falls that same night.

I woke up in the morning and ran down to the falls to see if it was maybe, possibley running for a second round... it wasen't. It was still a cool looking drop and amazing canyon. A little tid-bit of info about that waterfall, I talked to some local boys who were bored and went to measure the drop for fun. It was roped at "68" feet tall, not a surprise, that thing is massive.

We met the crew at the 50 50 bridge at 11:00am sharp. We went and had a quick look at the box and 50 50 falls before heading up the raod to the upper reaches of the Ashlu. Everyone who goes up to the Upper Ashlu or Tatlow should thank Austin Rathman for clearing the avalanch that covered road. Thanks man for allowing us to hit this epic run.

Anywho we hopped in a few hommies trucks to drive up the gnarly road. The first challange of the drive is the creek you drive through. It was pretty mellow if you chose the right line. Then the overgrown road for about a Km or so to the end of the driveable path. Once you arive there you get your gear on and start walking. Max Knewaiser lead the way down to the creek which is pretty hellish. The last decent to the river is the worst, this is where two people dropped their boat and lucky for them Max is a manly man and stopped them from bombing the canyon goast style.

Everyone was in one piece and ready to get some. The water is so clean that I was stright drinking massive amounts the entire run down the canyon. 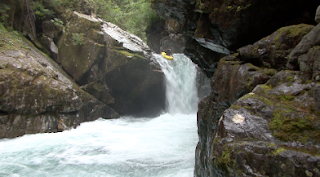 Lane boofin' the 20 footer at the top.

Then the sick 25 footer that is the classic melt down drop. 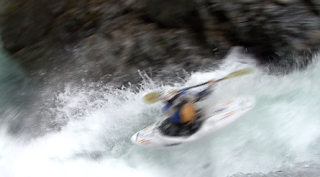 That leads into a fun double drop with two nice holes to get ya.

Next is the drop that got Lil Dave a while back, which was always considered to be a portage (run by some), until Lane and Myself saw nothing wrong with it and fired it up, followed by urryboady else. It is a cool S-turn slide with a big hole at the bottom.

Sick boggie rapids with great boof lead into what was know as the mandatory sieve portage. This rapid completley changed from the high water this year and is now a super fun double drop. 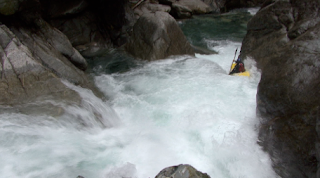 "Wall Check" 30+ footer into a wall, is next and is not scoutable. T.R.L. man Bryan Smith tried to do a crazy climbing move and fell in the eddy above it, so Max tried to look at it from above and got a little look. It was enough for me I ran it and whistled back up to the rest of um... Meaning all good bro's. 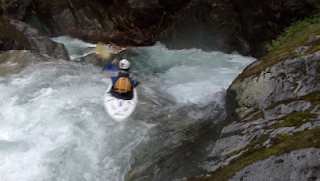 Me right about to drop off the big slide near the end.


The gnarly tree drop is the last big one of the run. Lane and Max both fired that one, but the rest of us did the trown and go style portage. 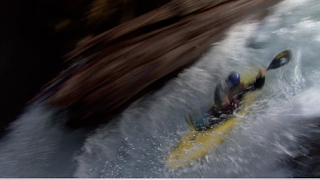 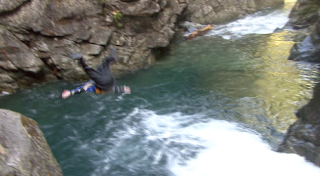 Me doing a nice misty off the trown and go.

One more little log walker leads in to a fun rally section out of the box gorge and to the take out pool. Such a beautiful place it is unbealeivable. Glaciers and tall peak surround you and the B.C. wilderness feel is strong up there.

This is an incredible run, has to be one of my favorites out there. We did it 3 days i a row getting the over all run done in under an hour. Sickness. We also ran the mone section a classic whitewater run on the Ashlu. It has two scary portages that scare off many paddlers. There is a 30 foot sea launch that is fun as well. You also get to see the carnage that the dam is having on the land and river at the end of this run, a sad thing go to therangelife.blogspot.com for more info on that subject. Thanks for reading friends...

We luckily met up with some Washinton boaters Chris, Matt, and Eric about an hour up the road to Big Silver. They actualy knew where they were and what they were doing so we hopped on board with them and rallied up the hill on a scouting mission. We found some sick drops and drop up further and put on.

Class III-and IV lead our group to a very committing gorge with a possible mandatory unrunnable 30 footer at the end of it. We all scouted and all of the members of the possie but Lizzy and I dropped in. After waiting a long time and watching lots of bad moves going down. We hiked out of the canyon and got some beers to watch them do a hour+ long portage.

They did get to continue down to the big ass triple set we looked at earlyer that day. They only ran the last 15 footer leaving a sick slot drop into a 25-30 footer that is still waiting to get run. Good job on sticking in there boys. This was a long day and ended my energy on trying to finds new runs, but there is tons more to do up hear just gotta get in it.
Posted by E.G. at 7:55 PM No comments:

We set shuttle for the North Stine and drove high in the coastal mountains to Van Horlick creek road. The temperture was 34 degrees on the drive to the trail head and rain was starting quickly. We saw 3 bears in 10 minutes on the over grown path and my poor Subaru just made it up the road where we camped.

Basicly what ended up happening on this deboggel of a trip was Lane and I dropped out due to many factors and Lizzy and Ben were forced to follow or do a 4 day over nighter alone. All the work we put in to doing this one was all wasted, but we have all the beta for next time or for anyone who needs it.

We did end up salvaging the day with a sweet little run on Cayoosh creek, a fun IV-V run with some great scenery. We also scouted upper Cayoosh and there is a crazy tight gorge with some burl falls in it that we didn't run. More driving took us all the way back down through Hope and up Big Silver Creek for another mission.

After Outdoor Retailer show in Salt Lake City Montana started to catch on fire and burn down. All the valleys were full of smoke and the rivers were dry. B.C. lured me back in to its grasp for a second trip of the year. Driving hours and hours a group of 4 of us met in Hope BC ready to explore. We checked out tons of creeks in the Fraser canyon, all ended up being too manky and high to be anything to speak of. 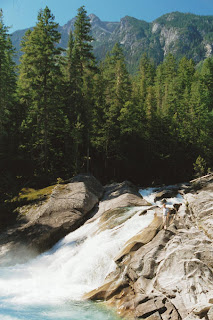 We did see this guy at the bottom of a creek that was 1000+fpm, but the hike was not worth just one drop.

After talking to a few people we reilized that the Twich boys had scouted and run most of the good stuff in this area years ago. Some thoughts on more searching went down but in the end we decided to go shoot for a mission on the North Stine.

After the long play binge at the skooks we headed back east to Revelstoke BC. 6 hours of enjoying the beauties of the Frasier valley and high mountains, which somewhat resemble the granite of California, we arrived in the small skiing town. Early the next morning we drove to Blanket creek south of town and hucked this monster. 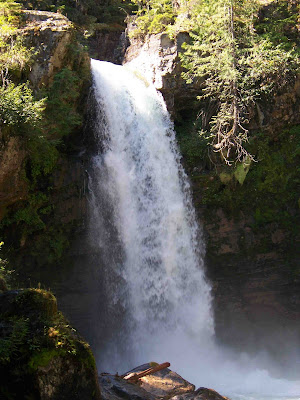 The main view of the falls.

I ran it twice in a row with the tuck and drop method. That's when you run the drop with a normal tuck and drop your paddle half way down, removing the chance of a broken paddle, and making the hit extra soft. The first time I ran it I did not even flip over. My second run was accented by my trusty dusty hand roll after another soft hit. Cheese stepped up and ran the drop after me and also had a nice line holding on to his paddle and plugging deep. This drop was much bigger than it appeared and taller than I thought before running it. 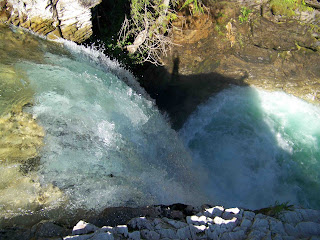 The view form the lip of the falls. We ran as far left as possible to stay with the main flow.

The free fall was 60-70ish feet, around the same height of Mamquam falls we ran two week prior. Not a minute after Cheese got out of the water a park host came and told us that it was illegal, I replied with a subtle "Well we just ran it three times." He was rather easy going for a figure of authority.

We have some nice video from this drop, I can't show it to y'all until later. If you know of Blanket creek there are some pretty crazy looking drops in a tight gorge, I was wondering if anyone had run it before. If not that's a good assessable first D waiting to be run. We drove stright south from here returning to the states feeling stoked for the big drop. B.C. is my new love and the potential is unlimited for the whitewater that seems to lie in every canyon. I can't wait to get back up there.

After getting skunked on all of the incredible creeks we went and scouted out around the Squamish area we were forced to bail out on creeking wait for the water to drop and go playing. A ferry ride that costs 80$ now and an hour drive down the Sunshine coast broughts us to Egmont BC home of the Skookumchuck narrows. We spent 8 longs days surfing while the tides were high. Acompanied by the Pyrana boys and a few locals we went off on the ever changing tidal wave. This movie features Cheese and Myself over a few days of filming that we did. Watch and Enjoy the movie. Later E.G.
Posted by E.G. at 10:33 AM No comments: