A long time kayaking friend of mine Shon Bollock of Shasta Boyz Productions is in the mist of putting together his newest movies Slippery When Wet. I decided to become a part of this project last spring while talking to Shon on a drive across the country. Then all summer I shot tons of footage from California, Idaho, Oregon, and Washington creating the ultimate West Coast reppin' segment. The highlight of my segment will be the complete footage of the Royal Flush from this June. All 5 massive drops of the Royal Gorge run in the same descent. Shon will be putting out 7 teasers for each paddler that is featured in the movie, here is the first. Watch and Enjoy...

Keep your eyes on Shasta Boyz Productions as they start to drop these teasers and get everybody pumped for SLIPPERY WHEN WET!

So there is a place...and in that place there is a place...and in that place there is a STOUT! The Rio Palguin hosts some of the most stout burl that us crazy kayakers can run. All within 5 miles you can find mellow class IV runs to the biggest drops that most of us have ever run. Last season in Chile was one for the record books, things that shouldn't have happened went down and everyone went huge all year. One of the most memorable drops that went down was Salto Palguin. Steve Fisher snagged the "first D" and many followed suit some made it look good, but most fell with very little success. I happened to be one of the boaters that got my ass kicked as seen in the shot below. 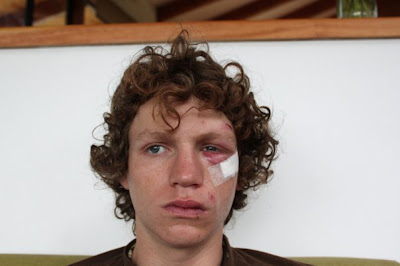 This was me the day after my first run on Salto Palguin...Not super stoked!

So after having pass a whole year thinking about the line and wanting to go back or not...the day finally came. All the boys lined up and had the Mo to get up to the top of the Rio Palguin and huck the beast once again. Our crew was huge and there was about 7-8 people thinking about running it. After scouting and decided that it wasn't too high I won the rock-paper match and went first. I was very very nervous, but had lots of faith in the dreamy line I had been thinking of for 11.5 months. Check out some shots Ian snapped of me... 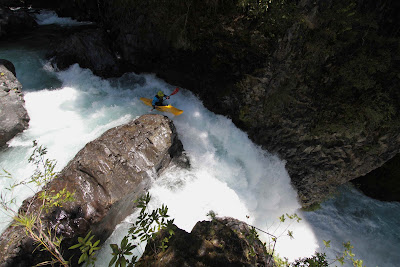 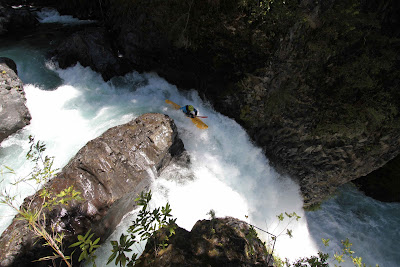 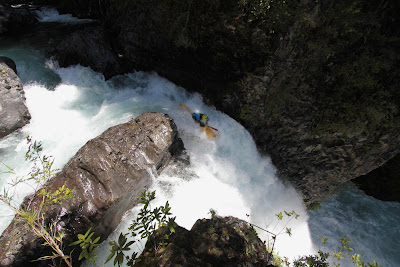 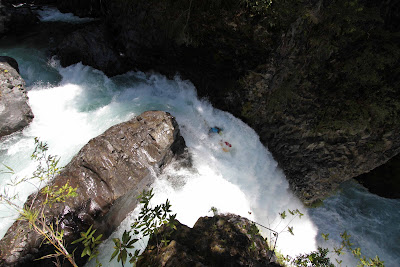 I ended up tossing my paddle and having such a soft perfect line. I couldn't believe it when I rolled up in the pool, all good, throwing high fives and browns with Erik. My paddle didn't come out until over a week later when a different crew found it and returned it to me back in town.

Once at the bottom relieved to be safe, I had to sit back and film all the other poor bastards who wanted to huck it. Jared was next up and was looking for revenge as well. Mocking off the lip with Devilish speed Jared sailed a boof of amazing proportions! Like a bird he flew and exploded upon entry with the pool. But what the hell sometimes when your running the stouts shit hits the fan. 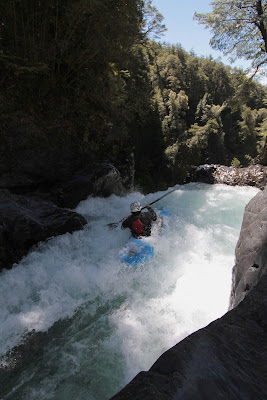 Jared roosting through the stout entrance of Salto for his second time.

Anton was next up and had a sick idea that charging the middle seem line was the best way to stomp the line. He disappeared at the top and come salmon jumping pout of the boil with out his kayak. 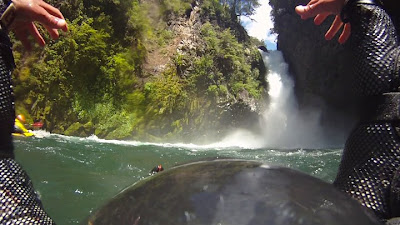 We missed the photos of him, but here is a sick freeze frame of him in the pool. 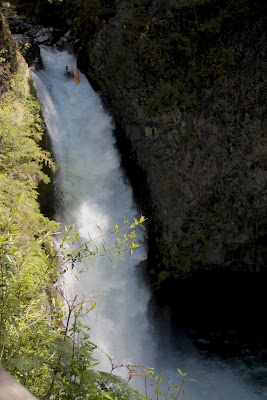 Logan coming off very crooked, but he ended up pulling off a crazy stroke and saving himself from hitting the rocks. He still got beat down on the wall and swam, but it was one of the most amazing lines I have ever seen. Next up was Nico, the first ever Chilean to run the biggest drop in Pucon. 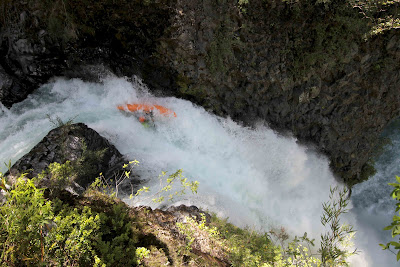 Nico got flipped by the entry curler at the lip and disappeared. Seconds later he came out of the boil, rolled up and had stuck the drop. He has a bit of history with this falls as well. Years ago he was just checking it out from the cliff high above and the tree he was leaning on broke. He fell about 120 feet into the pool and sustained minor injuries. So he was rather happy to have had a successful line! Congrats Nicolas! 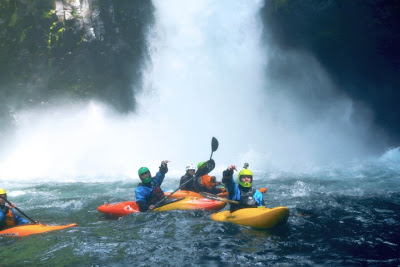 All the boys at the bottom of the stout happy to be alive and not dead. This was a very incredible day for us...its hard to make days like this a reality. There is always the times when you talk about going back and getting revenge or at least think about it, but for us to get there and have everything line up is nothing less than miraculous. Cheers to Salto Palguin for keeping us subtle, scared, and motivated.

Chile is an amazing place for kayaking, as we all know. Every year this place see's more and more boaters and continually sises to amaze everyone who comes down to this long skinny mountainous country. For the past two years Kayak Chile has put together and organized a Palguin river festival. Last year it went off with tons of people, lots of beer, good carnage, and an overall amazing time. This year was even better!

With over 40 really good racers we all met up on the weekend before Christmas to hold the 2nd Annual race. Head to head starting with either 3 or 4 kayakers made for a rowdy show and a hell of a time. Gringo Soto shot the entire race and put together a sick video telling the story of the day. So I won't get to in depth with my own words. Sit back, relax, and enjoy the show brought to you by BUENA LINEA PRODUCTIONS.

I have tons of pictures and videos to put up soon so just keep your eye out for some of the most insane Chile stories to date.