Hells Kitchen and other stuff...

We drove through dusk heading south on highway 49. After both Dinky and W.C. I was very tired so naturally I tried to catch up on some sleep in the teva Toureg. Contrary to popular belief the luxurious leather interior is not comfortable. After an hour or so of sitting in the back seat sweating we found Ben's van in Bear Valley. We woke him up and made plans to met in the coffee shop the next morning. After another night of sleeping in the dirt on guard for bears (because Rush swore he heard a bear in the woods)We met Ben, checked the level, and drove to the Putin. As we pulled up to the river we saw a few friends (Cheese, his brother, Dave, and Andre) They did the run the day before us and told us we had a long day ahead of us. It turned out to be way more manky than I thought with quite a few portages. Rush ran the 40 foot gorilla on crack (Portage #24), and Astrostar. #24 did not go well he gutted it down the middle disappeared and popped out the bottom upside down after taking a huge shot to the elbow. That was not the only carnage of the day, for those who have run the H.K. before, remember the rapid with a few boofs into a juicy pillow going off a 8 footer? Yeah I decide I wanted to plug the pillow, do a kick flip of the 8 foot ledge, almost tag the wall in mid air, and go into a nice down time. It all was fine I just rolled up past the hole and paddled out, but it made for some good video. The rest of the run went fine, there were tons of boofs and moves to make all the way to the take out. The description says this run is a classic, I disagree but still think this run is a great class V day on the water. Some picture by Ian Garcia enjoy. 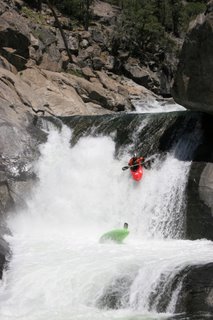 Ben and Rush blue angling the S#%* on the north fork of the Stan. 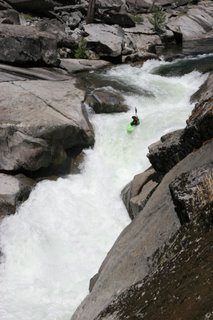 Rush sticking the crux of Astrostar

After completing this run we drove to Coloma and had a quality CC night. This next day we got our stuff together said goodbye to some friends and took off for Lane house to start our drive home. I wanted to stay for Upper Cherry, and we almost did, but After a day of cliff jumping in South Lake we called our trip good took off for home.

With the end of this trip and a season of boating in Cali we completed a Sierra triple Crown (Royal Gorge, Dinky Waterfalls, West Cherry) and did some epic boating all of which were new runs to me. This has been my first season of kayaking in California and now I know why everyone is so crazy about it. Here is the list of the rivers I did in the 7 weeks I spent in Cali over this spring and summer:Kaweah, NF Kaweah, Merced, SF American, NF american, Webber, Traverse, South Sliver, Sacramento, South Yuba, Paully, Lavenzola, Slab, Dinky, W Chery, Cherry, NF Stanisalus, and a few others.

It was a great experience, I met a lot of cool people ,and had tons of good times. California is my new favorite place to kayak in the world over Chile, Africa, new Zealand, all those places. I hope to spend next summer there adding to my list. "California Gallery coming soon" Later E.G.
Posted by E.G. at 9:30 AM No comments: 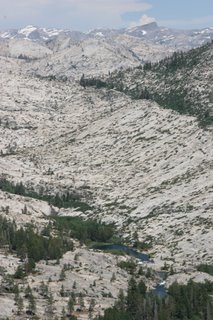 West Cherry was a run that has interested me from the first time I saw the LVMer's running it a few years ago. After our epic run down Dinky creek we drove stright to Cherry Lake to met up with our crew: Lane, Ian, Rush, Merlin, Charlie, Ligare, and me. The next morning Merlin thought he was a genius and lead us 30 miles from the put in. Lane corrected him and lead us to a trail head some where close to the creek. I have heard nothing but bad stories (7-8 hour hike) about the hike in: Ben Stooksbery got lost 2 day before us and found the creek 6 hours into his hike at the end of all the rapid at the big portage. we on the other hand just kept walking upstream until we found a a bluff that looked over the whole canyon. We saw the creek and started to hike down the canyon wall. Merlin decided he did not want to carry his boat the whole way, half way down on its speedy decent the boat hit a downed log and stopped. The boat was broken! When we got to the creek we set up camp, Merlin welded his boat, and we started to hike upstream to see if there was any worthy. 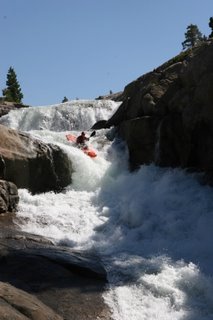 Ian bombin through the first big drop of the day, photo EG 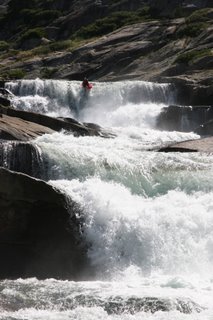 Merlin gettin some at the top of one of my favorite rapids in the world, photo Lane 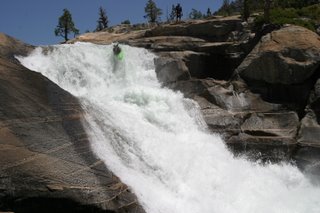 Rush boofing the top of the biggest drop on the creek, you should see the whole gorge you have to run!! photo Lane

The hike to the creek only took us around 2 hours, not bad. When we went up stream there was nothing that caught my eye, a manky slot gorge, some portages, a 15 footer, and low angle slides, nothing compared to what was down stream from where we camped. The run took us most of the day and once we got to the confluence with upper cherry we knew our trip was not over. They group estimated 600-700cfs was in upper cherry, HUGE. We made our way down it very slowly, portaged what we wanted to, and ran some huge juicy slide and rapids that were scary but still fun. Once we got to the other side of the lake we started to hike back to the cars, 50 minuets later we were there. This was the single longest day of kayaking I have ever done, a true mission, so don't try it if you are not in the mood to do some work and put in a long day. 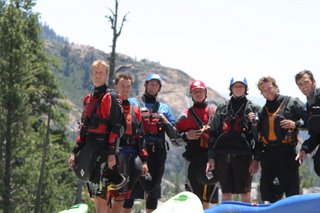 We randomly saw Ben Brown at the take out and came up with our next plan. Meet in Bear Valley and do the Hells Kitchen. Enjoy the pics, Later E.G.
Posted by E.G. at 10:02 AM 2 comments:

All photos by Lane Jacobs

A 14 hour drive back to California on another mission to run the shit, Ian and I found ourselves a few hours east of Fresno in the mountains ready to get it. 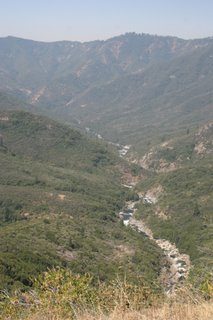 The Dinky creek waterfalls section is one of the most classic pieces of whitewater I have ever paddled. It is an amazing pool drop run that is a tributary of the North fork of the Kings. The run starts off with a huge down hill climb through the infamous California Manzanita. Our crew started off huge: Pat keller, Lane, Ian, Billy Murphy, Billy Jones, Jed Selbey, Andre S.S., Dave Fusilly, and your truley. Lane , Ian , and I took off on the hike earlyer and ended up waiting over an hour at the creek for the others to catch up. By the time they arrived at the put in the 3 of us were amped and started our way down stream. Almost every horizon line we came up to was a big drop so remembering each one is imposible, but there were a few that stood out as bigger or better drops in my mind. 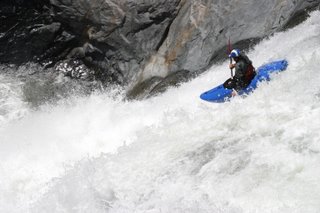 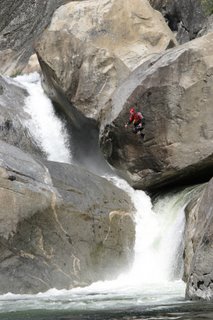 Ian jumping off one of the 2 manditory portages. This is right down stream of 2 great drops: a slide into a 20, and a clean curtin 20 footer. 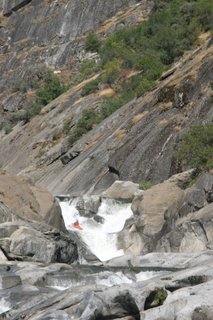 Ian on the triple drop that lands in a pot hole, it's BIG but it's GOOD 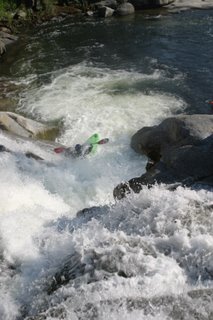 The big slide lane fired up just down from the normal camp for day 1. In the group behind us Jed Selbey dislocated and seperated his shoulder on the big clean slide above this drop, he spent the night and had to get hellivact out of the canyon the next day. The infamous "Billy Murphy" was also ripped out of his kayak on this same rapid sometime later that day as they passed through. 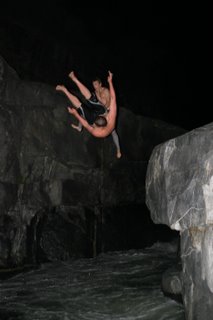 The boys (Lane and Ian) were more than ready for our camp cliff jump after gettin' a little Beam in their system. A little midnight tandem jump. 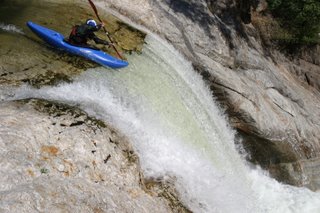 This is another curtin call 25 footer right below a perfect 20 boof.

Dinky creek had so many big clean drops that it would have taken days to get pictures of every one. So these were only a few out of 2 days of good whitewater. This run is at the top of my list for sure I have never been to a place with so many class V drops like this. The weater was hot. Maybe close to 100 and the sun was beating down on us all day. Another reason why Cali happens to be my favorite place to kayak in the world. Lane and I were at the take out for ever waiting for the other group to get down and for the long shuttle. When Ian got back we loaded up and started our drive to West Cherry. Later E.G.
Posted by E.G. at 10:56 AM 2 comments:

Hey, here is a little part of my new movie i'm in the making of. It is all my home town waterfalls and creeks. The section features Ian Garcia, Dan West, Cameron Goodman, and I. The movie is about half way done and is turing out super good. It is a video about my last 2 years of kayaking and features drops like the middle line of #9 to the big bird on the middle Palguin. I should be done with it after my next trip to California. THE VID, hope you like it. Later E.G.
Posted by E.G. at 3:05 PM 2 comments: