Kim Jong Movie theres the link for the movie from the wave we were surfing on day 3 of the Great Bend. Some cool stuff. Headed to the Mekong now.
later E.G.
Posted by E.G. at 8:39 PM 3 comments:

Ahhh... The Great bend. A great adventure indeed. We set off for the Tiger Leaping Gorge with great glee for the 14 day trip down the Yangtze. After an hour and a half in the bus we arrived at the mouth of the Tiger's gorge. The section of whitewater within this chasm is quite impressive. This canyon is very similar to Grand Canyon of the Colorado, with class VI rapids. 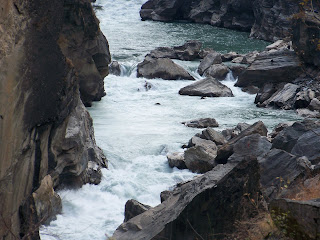 After spending the night in a guest house with in the gorge we drove down stream and hiked 20 minutes to the put in for the GBY where we met our rafts and gear.

Over all the river was very flat with some fun Grand Canyon style big water rapids. 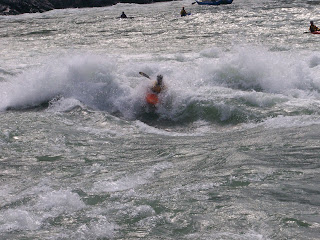 The amazing part of this river, was that we found a good play spot everyday, but the last 2 days, which were basically like paddling upstream for long periods of time with upstream wind pounding your face, very fun stuff. 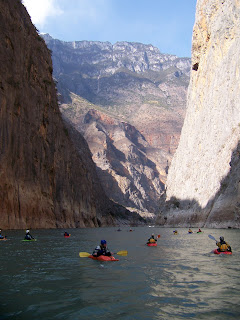 Floating deep in the lime stone gorge with the normal WCKA crowd... A bunch of white turkey's infesting China, the mother land.

The trip normally takes 7 to 8 days, but with the WCKA school aspect added in we took 14 days to finish the 120 mile trip.

Carnage?? not alot but we did have some swims, a flipped raft, a broken oar, and a good eddy ride in Wall banger by Scott. Oh and the wrath of khan, the 24 hour puke sessions which I shared with many others.

Along the way we found many a good play spot. The main and best feature was a joyous huge wave we dubbed Kim Jong wave... cuz it's so ILL. Rerry ill!! 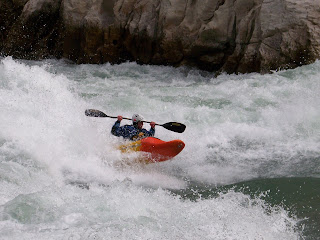 Kim Jong your my lady... I'm ridin' dirty on the beast ready to throw nasty air.

We only surfed the wave for a limited amount of time but we threw down some big stuff, it improved the vibe of the trip greatly. The other play spots included savage waves like Dropshot, The Curler of Justice, The Pillow, and many fast surgey waves and holes. 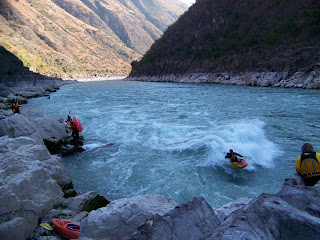 The Curler of justice. Glenn Daggle showin' it who's el Jefe del rio.

This river was a great way to kick off a China trip. The culture surrounding the river was cool to see. the people who live on the river depend on it for everything. On day 9 we hiked up to a bigger city high on the cliff walls named Bao Shon. We spent the night in this city and got to see first hand how the river people live. On a sad this place is in danger of dam projects. The Yangtze is already blocked with dams but the Chinese government has plans to dam the Tiger Leaping gorge. That would destroy one of the most amazing places I have ever set foot, and give no one else the opportunity to see this same river canyon. 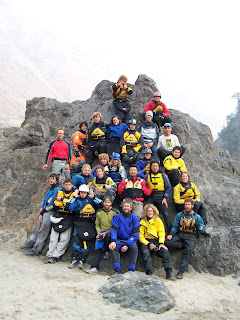 The group at the last camp. The 07 WCKA crew + Travis Winn, Adam, Tashi, and Chen. Cheers Bra!!! look forward to the Kim Jong Video... coming soon as I can get a computer to edit on.

Leaving on Wednesday I drove to Missoula meeting up with part of the crew to pack and weigh our bags. We then embarked on our epic journey from Missoula to Seattle to LA then to China. Once we got off the 16 hour flight we then spent the entire day getting from the Hong Kong area to Lijang in the Yunnan Province. We ate a slightly gressy yet aight.. meal then hit the Chinese beds up for 10 hours of sleep. Today we went on a hike and got a cool view of a big 18000 foot peak that dwarfs over the city. The next part of the group is coming in tonight, then we are starting to pack and rig rafts for the Great bend of the Yangtze river for a 14 day trip of big water play boating. 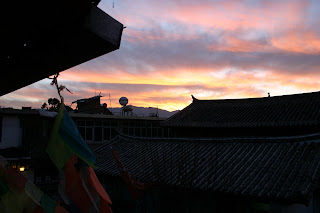 The first sun rise of the China trip. This is the view out of our hotel window in old town Lijang.
This is my first trip to Asia so everything here is new to me, the food, the cities, the people, and the landscape. It is the most culturaly rich place I have ever been, the people and buildings are unique and incredible. The rest of the trip we are focusing on three diferent rivers. The Salween, Yangtze, and the Mekong rivers. They are all big high volume rivers with huge waves and play spots. I'll try to keep you updated with some pictures and stories. This should be a trip to remember so BDP all up in China fo real. later E.G.
Posted by E.G. at 9:50 PM No comments: 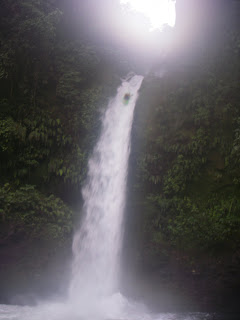 Jon Meyers checked in with a rather large photo from christmas break, as he spent his time over the holidays in costa rica. But with the large waterfalls that lay with in the countries borders he found himself hucking off a few of them. Like this massive double drop La Paz, as he is pictured on the 80+ foot bottom falls. As his skirt exploded on the first 50 footer and then bombed off the second massive drop releasing his paddle and rolling up at the bottom pumped.
Posted by E.G. at 6:42 PM No comments:

Oh this one's a big one.
Make sure you watch the 2006 Movie, click that. Or if you got that slow internet, no worries click this. Low Res 06' Vid. These are the same movie and they cover all the places I boated in last year and has tons of rediculous footy. The last month or so has been busy, in a different kind of way.

The end of Mexico was "EPIC" we hit the Alsaseca day after day. The bomb rapid of the section we were doing was a twisted mess called S-Turn. 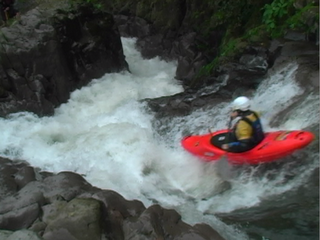 The infamous Joel Kowalski T'in up the speedy and delightful Turn of S. 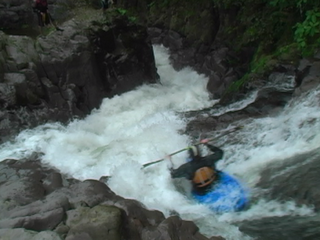 Me dropin' in on my second run of the day. These are frezee frames so the quality is poor, but you get an idea of the how the drop looks.

It is a pretty good sized drop but the tight nature, speed, and 90 degree turns are what make this drop one of a kind, Good time those were, good times. An Alsaseca Movie, Here is another little cut from the first round of our time at the rio Alsaseca.

After that, my flight home was Evan style. My ticket was 2 days off, the airline lost my bags, I sat in the Huston customs area for many moons, and yelled at a big fat international-gard, it was very enjoyable.

When I got home I was greeted by my 2 huge brothers, that now both out wiegh me by 20-30 pounds, and my always happy parents. We had a great Christmas, I may have gotten more from my sponsers than my family, but it was still super duper. The snow situation here in Montana is very sad so I have racked up many hours on the TV and X-Box this last week.

China is not far off, I leave for there on the 12th for some big water and big wave hunting. I have tons of new gear for that trip NRS has been hooking me up with some great new stuff, if you haven't seen their new goods you should check them out, cuz they "da bomb".

Ok well I guess thats it but keep your eye on this blog, there are a few updates coming soon that will blow your mind, I'll give you a hint "A huge Double drop in Coasta rica got another taker".