Evan & Isaac on the Nevado POV

Flashback from the past a bit more than a month ago in Chile....Love it...Check it out!

Todo Rio Nevado with Liquidlogic from Isaac Levinson on Vimeo.

I just saw that Rush threw this up on the Internet for people to get excited... check out this video, as it is the start to the best kayak movie of our generation. Up there with "Good to the Last Drop" and "H2Hoe". I hope you enjoy this taste while I'm putting together some sick shots from North Carolina.


Enjoy the Introduction to the movie by Rush and Tyler.

Check this movie out...Buy it at Dreamresultmovie.com It is worth every penny you pay. As well check out Rush's new LP...he has been working on his musical talent as well and is getting quite smooth these days. There are premiers all over the world going down this spring...catch one and party with some of the best partier/half-kayakers in the Biz, they know how to get down. Join me a week from today in Asheville, NC the 1st of April at the Pizza Brewing Company for a good time and viewing of this film.

How can such an epic trip down in South America come to an end? Well a huge natural disaster is one way... a 70 hour bus ride is 2 ways... a huge stout... and last but not least a terrible awfull sun burn is the forth. I got all of those things after my personal best trip down to Chile, of all times. We were finally leaving Pucon for good on our way to Lima Peru, when all of sudden shake shake shake...shake shake shake...shake the bus!!!! 3:00am on the 27th of Febuary an 8.8 magnitude earthquake struck. I'm sure everybody has heard about this thing, so I will make it short. We spent an extra 12 hours getting to Santiago and witnessed one hell of a torn up place. Here are some photos Candace shot form the bus... 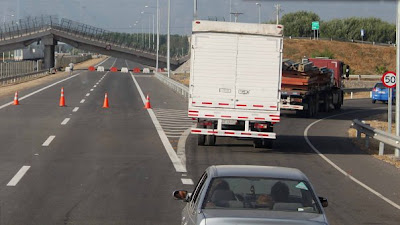 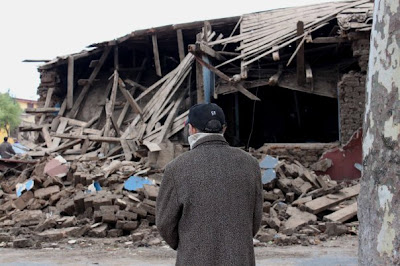 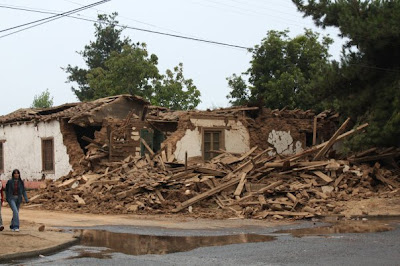 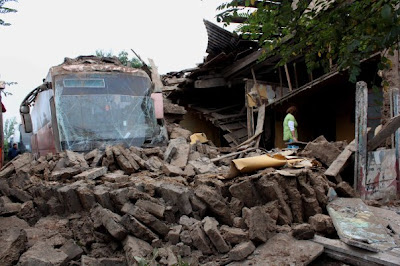 Once we passed Santiago things were smooth all the way to Arica Chile, where we sat for a few days to relax and play in the ocean before our last leg of the trip up to Lima. It was a great long trip up through the Atacama...the worlds dryest dessert. I really hate to say good bye to my favorite place in the world, but I know I will always be back someday soon. Here are some stats and favorite things about my Sep. 2009 - Mar. 2010 trip to Pucon Chile;

Well thats that...Have fun out there and I will see you guys down in the Southeast..well I'm already here in Asheville running the goods, so just stand by for some photos and stories.

It was a monumentous day in Chile...little Evan Garcia was finally turning 21 years old. I have spent my 17th, 19th, 20th, and now 21st birthdays in the city of Pucon. This one was no different than the rest because it doesn't matter how old you are down there, you can always go to the bar and order a beer. On the other hand this one was a big one for me, because now when I get home, I can continue my South American bender...not really though?

So with an early start at 3pm I headed into town to get a crew ready to go up and run a stout on the Palguin. After about an hour of waiting I ended up with Isaac and Todd Wells, a WCKA kid who got the day off to paddle something big with me. We got to the river and went straight to the Middle to park and huck the big boy. Candace set up for some nice photos and off we went. 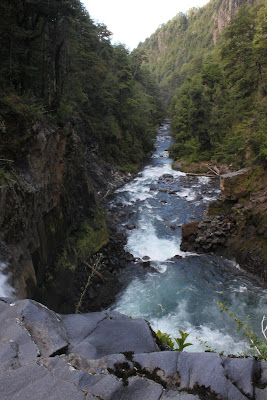 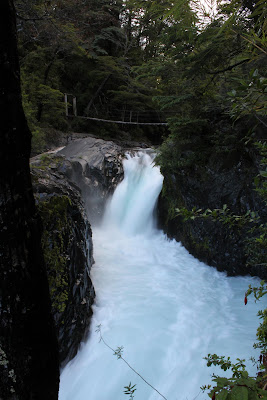 Stout 10 and the boils of the pool above the biggen. 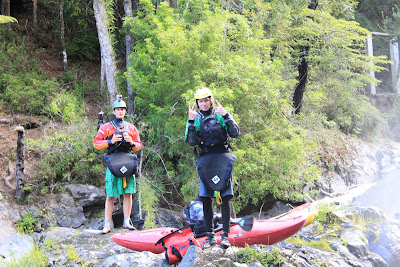 All fired up we went one by one and had some good line off the beast...I'm not proud to say that my second swim of Chile this year was on my first run of the day. My skirt blew and I had to take a quick dip in the cold waters. I wasn't gonna end my day like that so I walked back up there and ran her again. 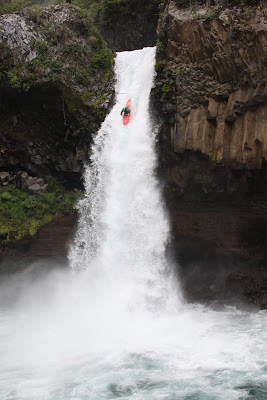 Isaac looking right about perfect with his paddle out of the way and no where to go but down. 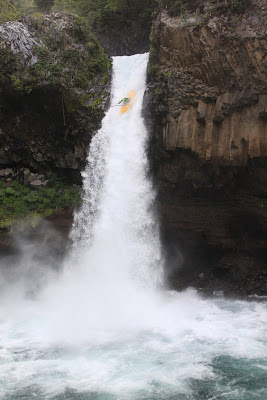 First run of the day and a picture from the bottom of the beast. 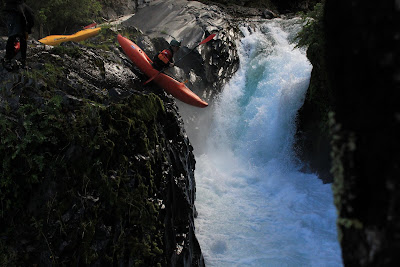 Some beautiful light on the stout10. Good work man.... 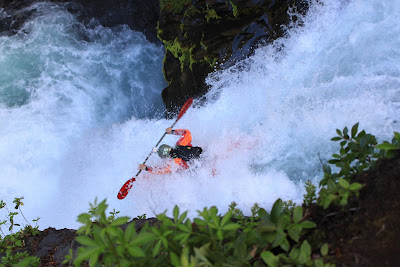 Todd Wells getting his paddle toss just that much more dialed in for this spring in the PNW. 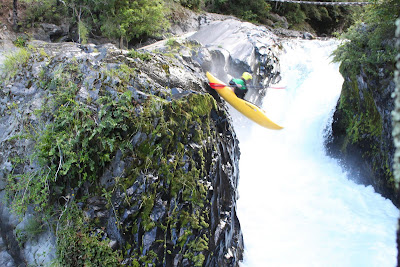 Seal Lanch into the pool, the more chill way to enter the 70 foot freefall. 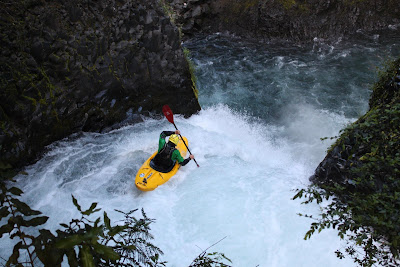 T-in' up the stout for run number 2 of the evening.

We all ran the stout two times to make sure we got our moneys worth out of the Palguin on this day. With that all said and done we headed back into town to get our party on!!!! It was my big day! 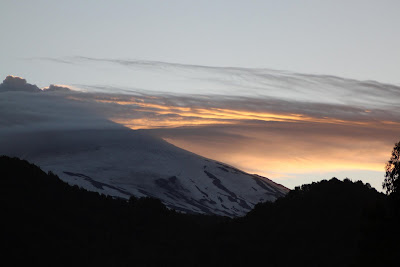 The volcano was quite the septical on the way home from the Palguin...so much so we stopped for a time lapse opportunity.

We all gathered at Lj and Jared's house in town and had a nice little night of eating and drinking before hitting the bars in town. I don't remember all the night events, but it was a good time. 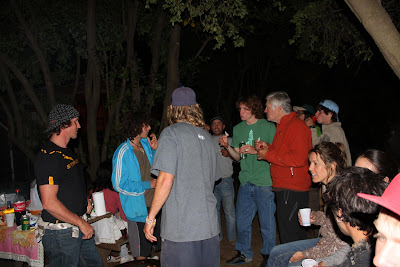 A little asado celebration at the casa cafe in town. Stouts, meat, pisco, beers, cake, and good friends made this birthday one to rememer.

Summer was in full effect one sunny February day in Pucon...we were doing our norm and hanging on the crowded beach drinking tap beer. Myself, Levinsjoo, and Candy, when all of the sudden we were swept with a burst of motivation! To the ever so classic Upper Trancura river we went. Joining us was my 57 year old father still paddling class IV!!!! and Ian my brother. The short drive out of town, was longer than normal due the shear amount of people coming in to the city. 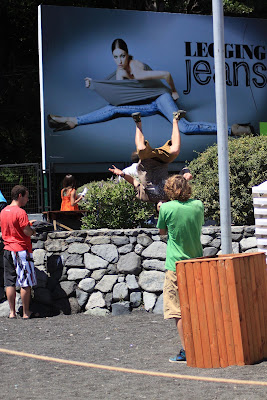 Isaac busting a backie at the beach trying to impress some chilean chicas near by. 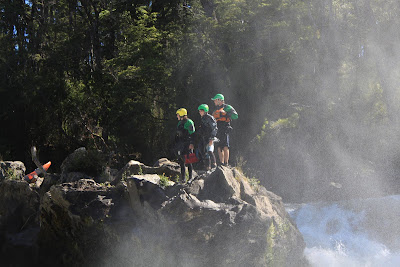 Myself, Isaac, and Ian scout the big ass rapid. The entrance was a bit easier than the time before with Aniol...but still stout none the less. Big holes, big waves, and big water feeling make this drop a lot different than the normal Pucon stout. 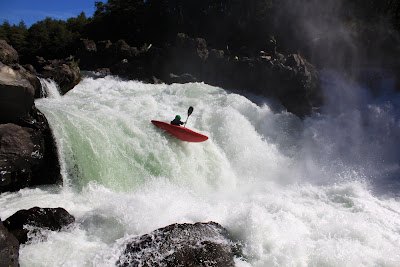 Isaac fired it up first...different line than we scouted but it went really well...so it was the new line for the day. 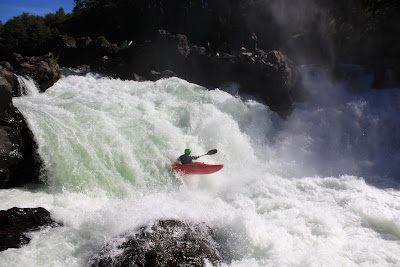 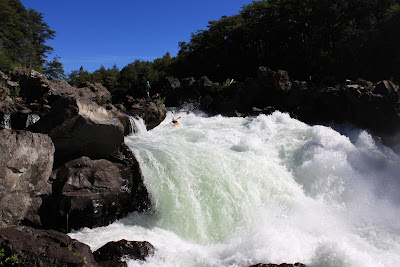 Getting through the entry that messed me up the time before...the time with much more grace. 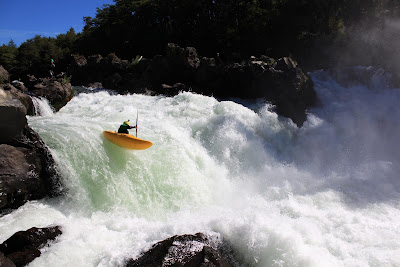 Myself really givin' it all I had...this rapid scares me in general, not to mention last time I ran it I had a bad line. 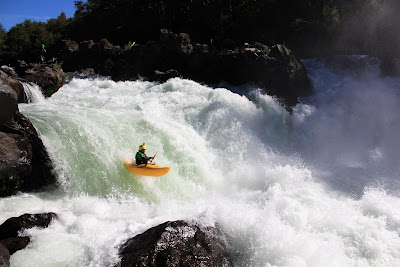 Out and away from the hole going a bit further right than Isaac. 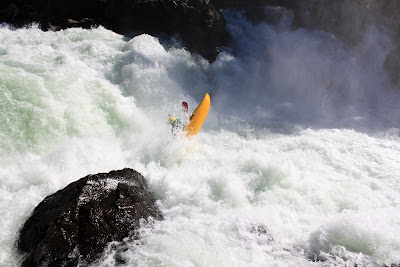 I caught the blowout from the hole coming off the rock in the foreground of the photo, and salmon jumped way up and out of the pit. 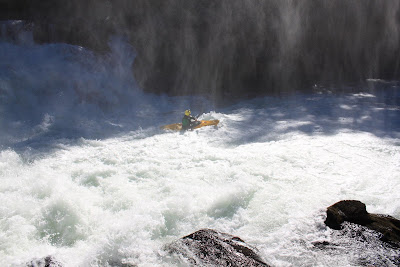 I kid you not I landed pretty close to this spot in the photo...it was a sick huge rapid and a great redemption line for me.

Thanks to Candace for the photos!

Summer 2010 in Pucon has been one to remember in this region of Chile. The water was good all season up to this point and it just keeps raining and keeping our classics going. I still have a few more good Chile update to put up along with some video clips...keep up to date cuz now I have Internet.