The next part of our trip took us to the state of San Luis Potosi. This is where the trvertine rivers lay in thick jungle habitats in the Sierra Madre mountains. The rio Micos and Saltos are ture classics. Fun clean waterfalls from put in to take out, ranging from 5 to 20 feet. There is a 70 foot sliding falls at the put in of the Micos and a 100 foot cascade at the take out of the Salto, but both the drops seemed super sketchy to me. Due to the sticky rock and low water we thought the boof-ability was high and hit you would take was not worth running the drops. 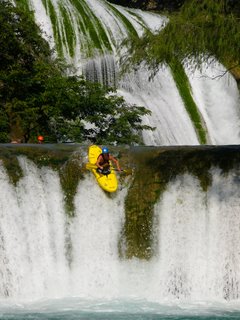 Reid on the micos river, The big drop is in the background of this picture. 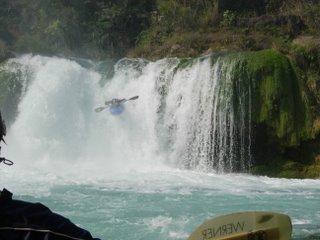 Me on a fun lofty 15 foot boof on the Rio Saltos, Get her Done!!

Other than that things are the same. I have been sleeping in my hamock over the river, and yes, I'm slighty sick from the water and food of Mexico. Typical!!! We are headed to the Santa Maria and then back for round II of the Alsaseka. The goods!!! check ya later E.G.
Posted by E.G. at 8:28 AM 7 comments: 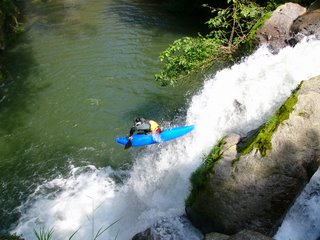 The first 20 foot drop on the roadside section of the Alsaseka.

The Alsaseka river in Tlapacoyan is one of the cleanest, steepest, and best rivers I have ever seen. This is where Stooksberry and those boys just went off, for the filming of Hotel Charlie 2. They first D'ed tons of new whitewater and opened up many new sections that had been thought of as unrunnable before. While we were there we met up with Raffa Ortiz, a local boater who was a big part of that expedition, as well as one of Joel's good friends. He joined us on the classic upper roadside run, which is packed full of tons of great drops. The best part about this run is that every drop is clean and good to go. 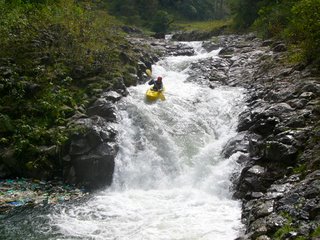 My man Alex Daggle styling it on a great drop!!

After a day on that we got a taste of what thos boys were up to the 2 weeks before we got there. Raffa took us on 3 sections of the middle Alsaseka. From Big Banana Falls to Puente Tomata. These sections, that had taken them days to complete, took us one long but fun day. We walked the Burning time 40 footer, although it is clean, if you hit the line, we had just decided before we didn't have the time to set the right safety up. Other than that we ran great whitewater all day. The best drop was called the Meat Locker, a double stage 30 footer with a 90 degree turn that went well for everyone. We stayed at a great place called Adventurec in Tlapacoyan, it was sweet they cooked 3 times a day and we all had beds. We are on the move to the Micos, but in a few weeks we are returning to run more of this excelente river. 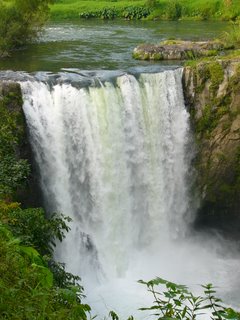 The beautiful Tomata Falls. This thing is huge, but good to go with a tad-bit more water!!

Alsaseka Movie and Middle Alsaseka pictures coming soon after round II and finals for my first semester of senior year. Later E.G.
Posted by E.G. at 6:40 AM 1 comment: