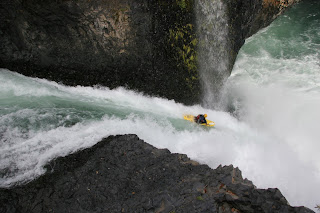 two night ago we drove our selves through the night and found ourselves in a disco until 5 in he morning outside lago ranco. we awoke after only 3 hours of sleep and drove up to salto de nilahue. it was first run last year by LJ and trip and can be seen in EP Epicocity Project. but shortly after their decent the waterfalls second tier collapsed leaving it as a 60 to 65 footer sliding entrance, with a very scary cave on the bottom left. 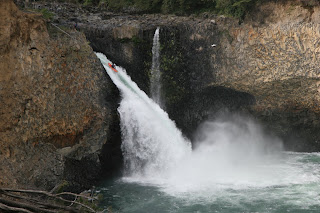 but with Rodrigo, Cris, and i(ian) we stepped up to the challenge and plugged her deep, for a first d of the new drop. 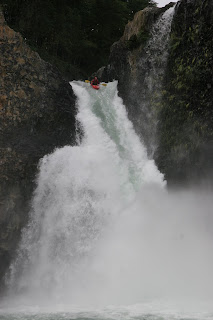 eventually ill put together some cool sequences and post them but here are a few photos.
Posted by E.G. at 6:03 AM 2 comments: 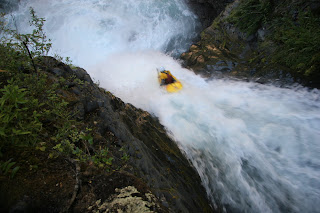 after a week in pucon running some waterfalls i took off and headed south to meet up with the boyz. the crew was big and hurting from the night before as it was rush´s birthday. the whole gang along side patrick, rush, ligare, katie scott, marlow, and tanya. when we arrived the water was on the high side but in a few days it had dropped to levels so low i had never seen the river like that. it was great to get out of the hectic area of pucon where i had recieved a massive black eye and swollen face after a bar fight. but then after a week of great play i headed north in one of the most screwed up journies that took 3 days to get from futa back to pucon, usually i can do it in a single day. thank god i wasn´t alone as my sanity was being tested hard. but here are a few more photos and something better to look at. 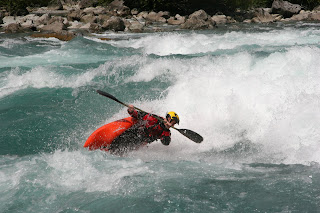 Yeah we are at the last of the three great rivers of the Yunnan Province. The Yangtze, Mekong, and Salween all flow out of Tibet into western China and then to the Pacific Ocean. Over the last 5 weeks we have been driving and kayaking through the deep canyons where only two sets of tall mountain ranges seperate the three great rivers. 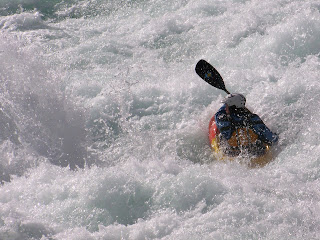 Me running one of the bigger rapids of the Maggi section.

The Salween is the steepest and hardest of the river we are on. The river is 300km of roadside big water rapids with tons of good park and play potential. We have done 2 of the 3 main sections of river, the gonshong section, and maggi section. They both have good big water drop and fun play spots through out the run. We have had to hike for the majority of the play but it will make my time at the Ottawa that much sweeter. 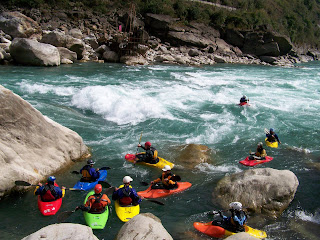 Salween special, at high water it is said to be as good as Nile special, but with the low flows it's more like a surgy wave hole.

The 18th of Febuary is also chinese new year's so it was a huge party and fire work war. If it had taken place in the states there would be multiple people in jail and law suits off the hook, that must be why it only goes down like that in China. We were on the 3rd floor of our hotel throwing huge bombs and roman candles out our window at people. It was a pretty fun night and a new expirence for everyone. 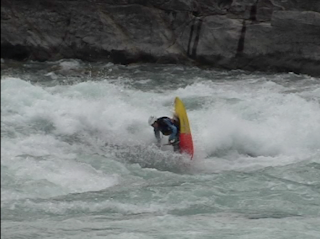 The wave dubbed ATM wave for it's out of control surf and amount of work it took to hike for it.

We have found tons of fun play spots but our hunt for the hidden wave is still running. The river has tons of potential and gradint, but with the low water the world class waves that were found last year by a 5 man crew are all big holes. We have another 2 weeks here so I will keep y'all updated on weather or not we find what our dreams are full of. 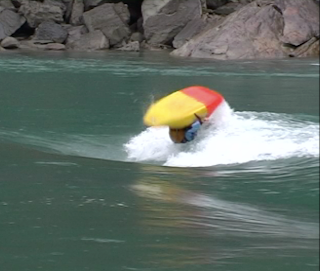 Looping at the Groover hole on the Maggi section

Soon I will be back at home eating western foood and getting my new creek boat ready for California. Overall this trip has been one to remember and I hope that other people will start to reilize how good these rivers are and make more trips over here to prevent dam projects that are in progress for all three of these rivers. Yeah baby yeah!!! keep it smooth!!! 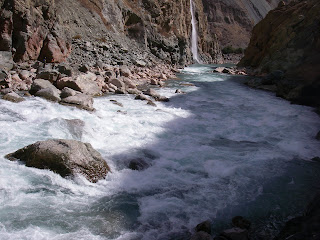 This is the first big rapid of the upper gorge on the Mekong a few of us ran it with varying sucsess. its bigger than it looks! Possible first decent? 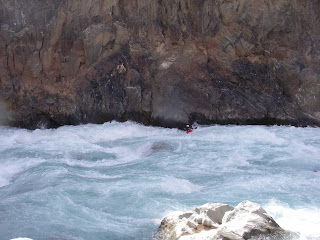 Here is Dave Zinn in the same rapid, this is a good shot for size. He's just a tini lil guy about to go into a big flat hole. 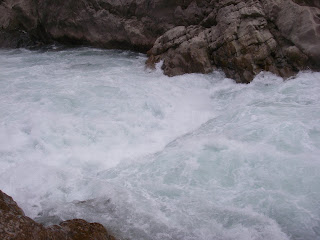 This mack daddy hole is the exit to the big drop on the lower Moon gorge. It's goes it's just a matter of sackin' up and doin' it!! The enterence is the tricky part and it's right above this punch. 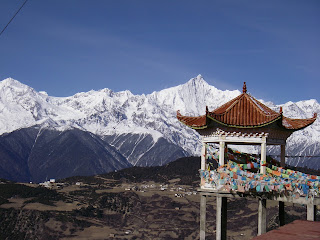 Mount Cowacarpa the tallest peak in this range and area. 22,500 feet tall it was quite the sight. 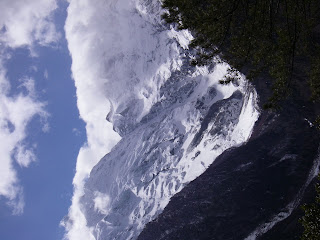 Sorry for the sideways picture, but its worth a look at. This was our view from the window of the place we stayed at in You Bong at the top of the hike we did. Thats a 22,000 foot peak right out our back door. Pretty cool place and the culture of the people and village was amazing to see first hand.

After the 14 days on the great bend we planed to drive over a 14,000 foot pass into the Mekong river valley. Half way there and not even to the base of the pass we were caught up in a snow storm in the mountain city of Shangur la. This was a fairly big so there was a hotel and place to eat. The weather was very snowy and around 25 degrees, not the warm climate I hope for when travling. Once the sun hit the pass it cleared our path and we took our sweet time driving over the Chinese tundra.

We have a bus and a huge "Dong Fang" truck carrying everything of ours around. It gets a little hecktic and stinky in there, group moral usally melts after about an hour of riding. Anyway we pulled into Dequin the biggest town in the area and had the normal 10 dishes of food before heading to bed.

While we were in Dequin it pretty much snowed everyday, due to the 10,000 foot elevation. A great motivator to go kayaking in the coldest water on earth. We did the 5th decent of the Lower Moon gorge, which was all class III+ with one monster class V that looked OK but kind of chunky. We also hit the upper Moon gorge which was possibly a first decent, no one really knows and it's pretty out there. The upper section had a total of 10 rapids, one we ran was a fun V'er with a pretty stout move involved. The sixth was a massive hole punch with a pourover backing it up, we opted to skip down the side on that one.

on a sad note. During a savage game of hide and go seek tag down town Dequin a close friend and student of wcka shatered his arm. His name is Davis Gove, he did this by attempting a daring jump from roof to roof. He broke through the landing side and fell 12 feet to his crunching fate. He flew home and got a ton of surgery done, a few different plates and many screws. All of our good thoughts are with you bro. Heal up for west coast.

After the two day completing the Moon gorge we put our kayaks away and stomped a 23 mile total hike to a classic Tibetin village high in the mountains. I can't say I was excited at the time to walk that kind of distance but it turned out alright, if walking lost in the dark on the side of a 200 foot cliff is alright to you? That escupade took us back to Dequin and marked the start of the 3 day drive to the Salween river drainage. Pictures coming soon of Mekong and Salween update.

chile again with another biggin 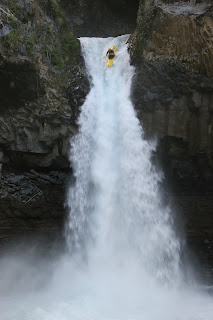 bigger brother ian here just checkin in. i have been in chile far a couple of days now and i still just love it, it is my fourth time here and always worth the pain. but although i have only paddled twice it has been exciting. just the palguin as always but when the middle section colapsed a year ago i thought it was gone for good. not so as it went again and created a biggin out of what use to be a 35 footer into a 50 footer. so here is what we got as cris korbulic, rodrigo from kayak pucon and i rallied the first decent
later 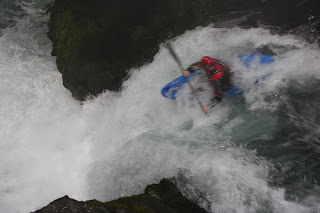