This waterfall has taken me a long time to get to! I don't live that far from it...nor do I live that close haha! The Malad River Gorge lies between Twin Falls, ID and Boise, ID about 7 hours from home in Bozeman. There is a great old school movie called "Buck Fever" Made by Spencer Cooke and Jed Selby back in the day...it features amazing old school freestyle and tons of shit running in sketchy boats! The late Charlie Beavers stepped up and ran this drop in a Wave Sport Stubby...which was a half river runner half play boat at that time! He styles the entry and comes off the drop nicely...only to tail tap, go vertical, and piton his brains out on a ledge half way down the falls. It look pretty disgusting to say the least!

I don't know how many years it took for Seth Stoner of Boise to step up for the 2nd D...but he ran it in 2009 at a much higher flow! This finally opened the gate to a big stout drop in that area of the country...other than this one there isn't much for runnable drops around there!

This spring I really had my sights set on going to run this beast and never could make it happen between Hood River and BC trips! I was surfing the world wide web a few days ago when I accidentally clicked my bookmark for the Malad River...and what did I see...400cfs!!!!!!!????? I quickly messaged the Boise boys and asked if this was for real and they said YEEEEHAWWWW!!!! With out much time to think our crew Johnson, Parker, Baby Bird, and Myself woke up at 5:30am and started the drive south to go get some Fall stoutness...

Upon arrival I suddenly realized that this drop was much stouter than I had anticipated! Meeting up with Seth Stoner, James Byrd, Davis Gove, & Russel Davies we had a stout and fired up crew ready to huck! Running in two crews to split numbers up we watched as the Idaho boys went first! The six stage entry gorge above the falls looked great and a ton of fun...the boys styled down to the last chance eddy as we watched...After 2 blown skirts, an ejection, and 2/3 people taking big hits to the bottom of their boats...I was much more nervous to run the drop! Still the line was good and we had driven all this way only for this drop...Myself, Baby Bird, and Parker laced up!

Our run went well with no swims or blown skirts...I did however jangle up on the entry and have to pull some quick ninja moves to correct above the lip...and Baby Bird took most the skin off a few fingers on the reconnecter! The bounce in the middle left small dents in our boats, but the hit wasn't too bad! All in all it was a great waterfall with a super good class V canyon leading into it! A total a win/win for September in the Rockies! This drop has some serious ID/MT mank factor to it...so any small errors could be "really" bad...i.e. hitting sharp rocks off a 50 footer...So this thing is the real biz! Enjoy a few frames snapped by Myself and Erik Johnson! 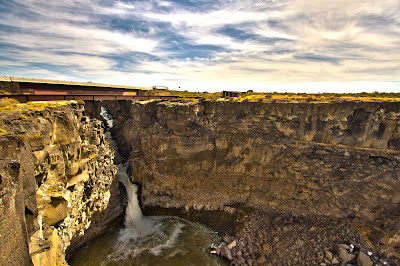 HDR shot of I-84 crossing above the Devil's Washbowl & Malad River Gorge. 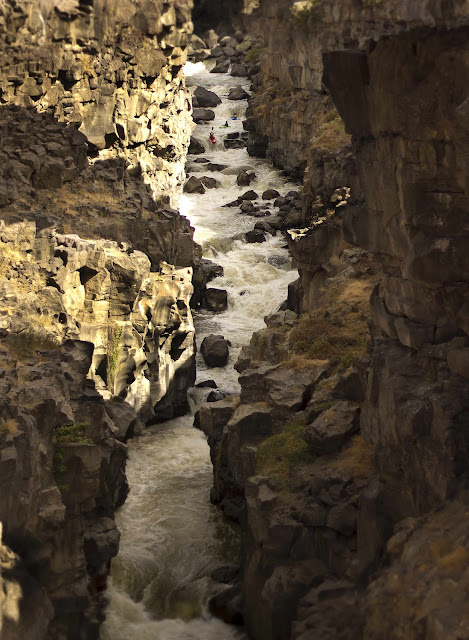 The Idaho Boys (Seth, James, and Russel) dropping into the sick gorge above the stout! 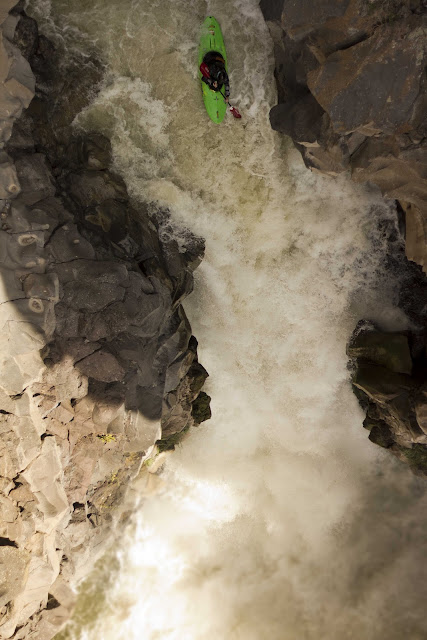 Seth Stoner taking his second lap off the stout! 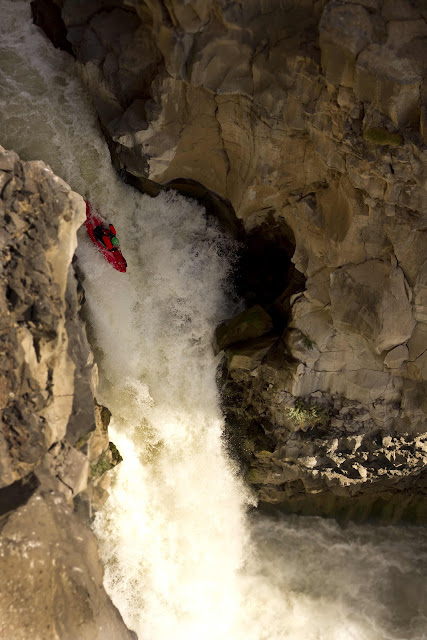 Myself taking a big stroke and spreading my wings off this roosting stout! 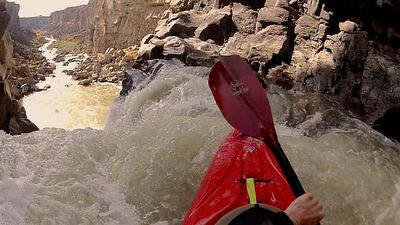 Here is a go pro freeze frame...love looking all the way down the canyon! Epic horizon line for sure!

Well folks I have a few more weeks of hanging out in Montana living the good life before I head to Vera Cruz Mexico and continue that good life! ;) We shot a ton of video this day at the Malad so look forward a a sick edit dropping in the next few weeks!

So for you all who have been waiting here is the first installment of our Norway episodes. This video features the paddling we did in and around the Voss area. Now I don't know a ton about Norway, but if I was a gambling man I'd have to say that Voss...is the best place to kayak in Norway!

This episode will take you from a random party night in this small Scandinavia town, to the crystal waters of the Brandset, the famous Double Drop of the Teigdal, Tyler and Ian's 70 footer on the Eksingdal, and many other massive Norwegian classics! So sit back in that chair, crack a beer, grab dem papelitos, and enjoy 39 min of White Water Boat Ridin'!

Nothing has changed...but everything is different.

There are certain events that take place in life which have a deeper and more profound impact on us. For some it maybe meeting a new mentor, moving to a new city, winning a championship, or graduating college. For me, as a crazed kayaker from a young age, there has been a pinnacle or milestone awaiting 1,700 miles north of my home in Montana.

As a young kid I watched the Triple Crown and Aerated to enter this canyon. As I grew into a teenager the ever so infamous LVM crew found their way up to Hi-way 37 to document this amazing river...The Stikine River lies eerily tranquil in the middle of nowhere British Columbia, where there is only a two lane road, a steel bridge, and a small yellow sign...

The first time I had the opportunity to paddle this section I was only 19 -> G.C.S.R. WRITEUP

As a young teenage paddler this descent was a massive accomplishment and definite milestone in my paddling career. It was kind of the turning point from where I became more than just another young hucker...back then I used to take a lot of heat on my blog for just sending stouts, out of control, not working, and the old monetary question..."how did you get your money?". Which I am still asked on a daily basis. And all I still have to say to all those people who ever questioned it is..."If you want it bad enough, trust me you'll find a way!"

Finally returning to the Northlands of deepest darkest British Columbia 4 years later...I was astounded at how surreal it felt to come back. There literally is only a road, a bridge, a sign, and a river...

This time around I was leading the group not following. It was a totally different vibe in there. I remembered most the rapids and sent quite a few huge horizons on memory from years prior.

"This place is soooooo bad ass!" I remember myself thinking that thought about a million times a day out there.

The canyon itself is a spectacle of the wicked power of water and what's beyond the canyon rim is the vast emptiness of the BC-AK borderlands. When you are tucked away in the canyon focusing on the whitewater and tasks at hand you sometimes forget that there is truly nothing out there. If you don't think about it all is well...but when you do the feeling of loneliness and true nature of the river seeps in to your soul.

I am vastly a better kayaker than I was when I first paddled the river in 2008. On my first trip I still only flipped two times, but that was enough. Once in a random rapid on day 1...(where benny got a savage beat down on this trip due to a last minute "leader" choice to go left, not right) and the other time was a terrifying roll during the hairy ferry at the bottom of Site Zed, not a fun place to be upside down! hahaha

This trip the level was very similar, a bit lower I think, and I just felt right in my kayak. My balance was spot on and I felt flexible and strong out there. I had a few very close calls, but I got my golden egg on the Stikine River...if you don't know what that means, I don't blame you, it's an old WCKA thing we did while running rivers! Everything clicked out there...We had a big and very young crew of kayakers out there (ages 23, 25, 20, 20, 21, 23, & 29) It was cool to be on the river with a fired up and solid group of people who truly enjoyed and understood what it meant to be in that canyon. Whitewater history was made on our descent as Ben Marr became the first person to run the entire river without a portage. On the float out we all decided that V-drive was our favorite rapid and everyone also stated that it was the greatest river trip of their lives...that my friends is a huge claim.

I really focused on understanding the river and remaining in the moment in while in one of the greatest most beautiful canyons on planet earth. It's hard to write words and state what goes through your mind out there after a successful descent, floating the 10-20 miles of flat water after the canyon opens up...but a man I have looked up to for a long time said it well...

"Nothing has changed, but everything is different." -Willie Kern 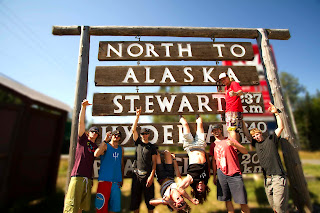 Here is out crew hanging at the Stewart Cassiar Hi-way sign! 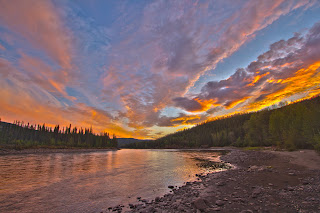 The Put-in for the Grand Canyon of the Stikine. 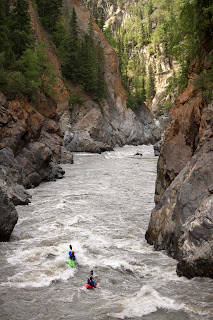 Erik and Fred committing to the Wason's Hole gorge. 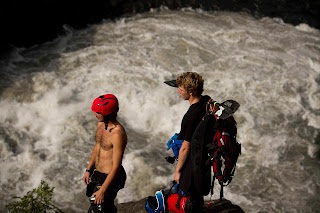 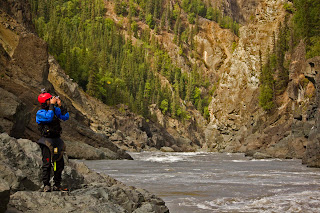 Fred Bomb Flowing whilst in the Stikine. 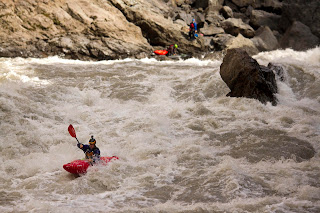 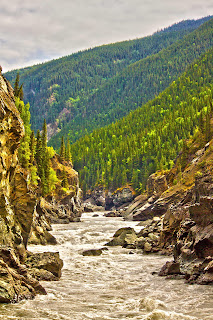 Gorgeous place...looking up at Scissors and Wall II. 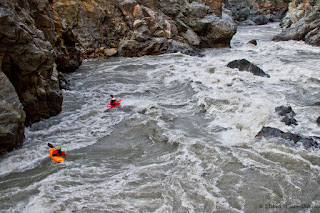 Myself and Benny dropping into Pass Fail. 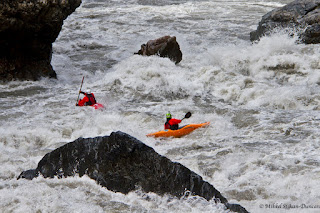 A pass and a fail! 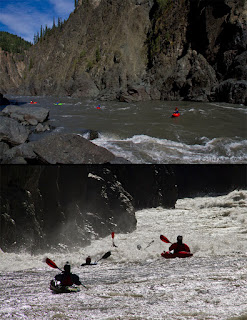 The boys dropping into "The Wall". 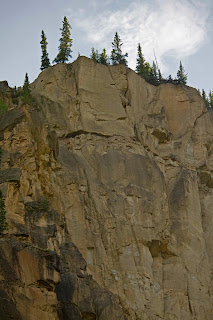 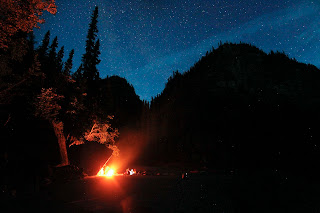 Camping under the stars on night 2. 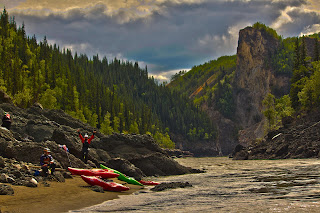 The crew stoked to be alive after Tanzilla Slot! 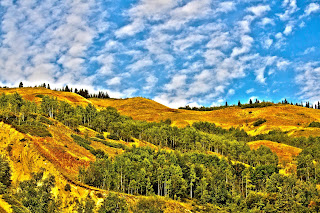 Reflecting during the float to the takeout after the canyon breaks up.

Best of GoPro with EG

We have been using Go Pro cameras since 2008...we used to have to put 2 AAA batteries in the back, and they would die twice going down the LW...haha! The times they are a changin'!!!!! These little bad boys almost capture the same quality as my 7D nowadays! Cray I know...so I pretty much always have one on my head, boat, or paddle...because god knows who kayaks with out taking video or pictures right ;) So by golly I've captured some pretty unique moments over the years...and dropping right here...right now...on the most epic and awesome kayak website EVER...here is a highlight reel of just a few of dem-epicz!

Thanks for the support y'all

Here in Bozeman, MT there is a cool company called Good Karmal! They make amazing Caramel candy and wrap inspiring quotes around them to sell to the public. They decided to do a little picture quote on myself due to the fact that I live an out there kind of life. I mean spending more time in a sleeping bag than a bed...driving over 25,000 miles a summer, and traveling from Africa-Argentina isn't a "regular" life. So I'm stoked to show you guy this picture and quote done by the amazing team at Good Karmal! 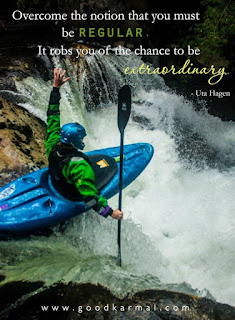 Check them out at their website here GOOD KARMAL!