After a first exciting day on the lower gorge, and a few good LWS and Green Truss high water runs, Myself, Erik Boomer, and the Brothers Wells returned to the small stream with the intentions of running the last remaining un-run drop of the two canyons. The day was set and with a long pretty drive out to the take out we met up with the young duo and readied ourselves for some kayaking.

The run starts off with some very tight log ducks that get the neck and back warmed up. Getting further downstream the creek starts to gain momentum and drop away. 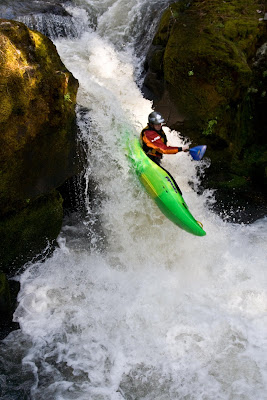 Todd Getting some on a small boofer up high on the run. 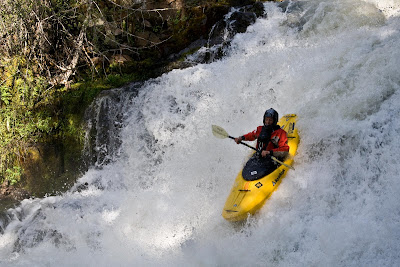 With five to six fun good drops under our belts we arrived at an open section where we could tell the gradient was about to vastly increase. We found this epic three tier slide to spark it off... 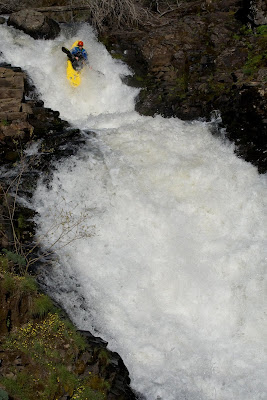 At the top of the Cali slide. 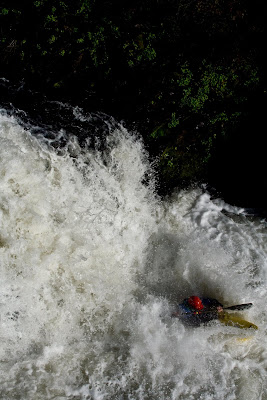 Landing off the last drop of the nice three piece slide.

This is what happens some times, He did do a nice 180 off the last drop though. Directly below this slide came a massive scary horizon line which solidified a long scout.

Todd Well and Myself scouting a big scary drop that kicked off a big canyon.

The basic run down of the gorge was;
-a shallow sliding 60 foot? cascading falls, with a very questionable landing depth issue.
-a small ledge
-20 foot bouncy slide
-20 smooth slide
All in a row after that big of a drop? I was not sold... Boomer seemed to be, so he got in his kayak and did a "gnarly brown" first descent. 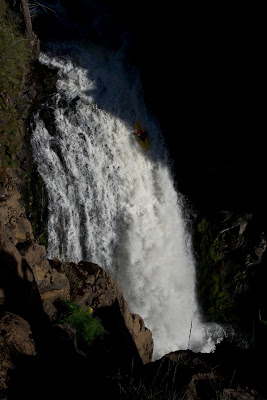 Erik Boomer stepping up to the plate and taking a swing at the Un-run stout.

It went well for him. The big flake, we could obviously see booted him into a monster boof, he landed flat stomping his bow down. With a blown skirt he filled up while running the next sliding section and got out pumped on his descent. I was still not totally sold on the drop, but Todd Wells was... 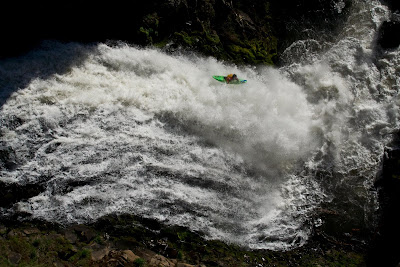 Una Locura grande.... Todd Wells. This kid can do some kayaking.

He got in his kayak and ran this beast. Taking a more plug like tactic to his run he tested the depth of the pool for us all. Coming up straight in front of the drop, he washed into the boulders and swam with a blown skirt. Seeing all this go down I knew I could run it successfully and in control. I came in moving left started the fall, hit the flake, and close to the pool threw my bow down for a soft impact into the pool. I got out in the pool to empty the small amount of water that entered my Jefe, due to my skirt also imploding. 3 for 3 decks popped??? I've never seen that before. The Jefe I was using didn't have a stern wall so it was a no brain'er. The slides were sweet and a good reward for getting into the gorge.

After this money section the creek settled and came upon the put in we had for the lower gorge. Already doing this run a few day before we routed through it in no time. Re-running the huge sliding falls and some more fun slides it was a very solid day out there for all four of us. I would recommend this run for anyone who;
1. Likes big drops
2. Doesn't mind log ducks/portages
3. Wants to get out there and see some new Whitewater in the area.

Before starting this post I have to say that this is a two part mission... two days... two different gorges. Day 1;

This is a sick little creek run we heard about from th Hucking Huge crew, that got it from some rad ripper kids from Trout Lake. These kids used to go up in the canyon with their dad to scout and hike and remember seeing big falls deep in the gorge. So anyway with lots of rain falling and a failed attempt to go and run the Outlet falls we ran across the beta for this small mission. The next day we rallied out in the proper fashion, late and unprepared.

Arriving at the put in with no shuttle rig we had no option other than walking it after wards. So we put on this small dinky little creek and set our sights on what could be downstream. After some logs ducks and and few small drops..... 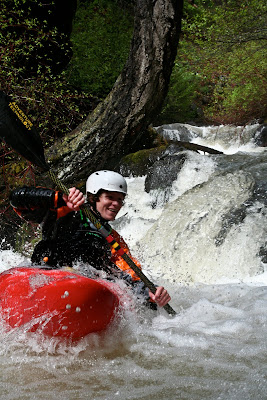 I guess I was having a hell of a time on this small little rapid. EG smiling big.

We arrived at a nice slide which was the entrance gate to the $crillaCash gorge. Two cool easy 20 foot slides lead us to a huge horizon line. 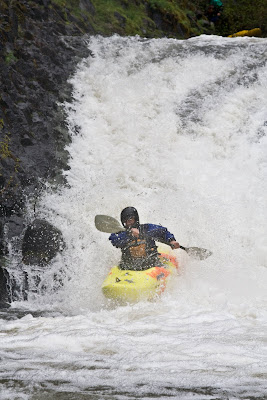 Max on the entry slides.

We got out and saw this massive free falling, reconnecting, exploding, stout. I was not sure what the success rate on this drop would be, other than the fact that the day before Ben Stooksberry and Cody Howard 1st D'ed it the day before. So Boomer ran first.... 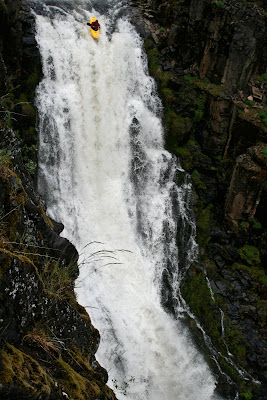 Boom Daddy probing out the Stout with him, I would have been just a little more scared.

It was one of the most unique drops I have ever run. A south branch 40 foot connector that sling shots you off a 10/15 footer at mach 5. Something like that??? 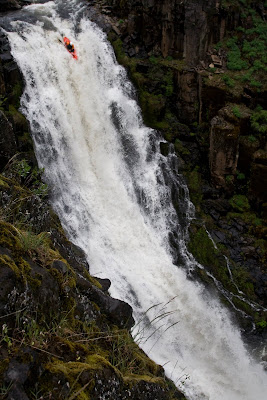 Going for the notch in the lip as to not hit a funky flake. 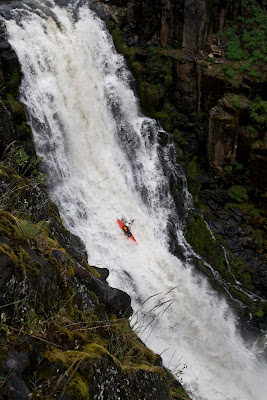 Hold on baby!!! Smooth as the creamy peanut butter I just ate. My favorite photo of the day. 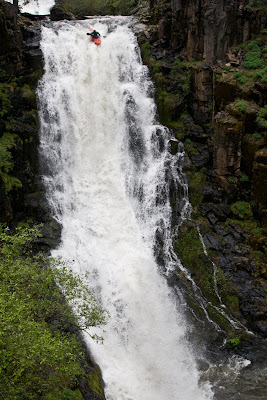 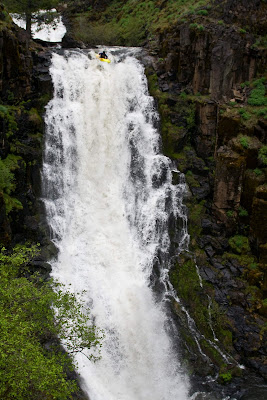 Max B.Burn off atop the Q.Pipe but the vert didn't match the trany... this made for a wild ride! After you are vertical the drop launches the yaker to a heels over head boof for about 20 feet in the air. So sick. After that the creek roars over a stout crack slide... Boomer ran it well, we all seal launched in after the crux. 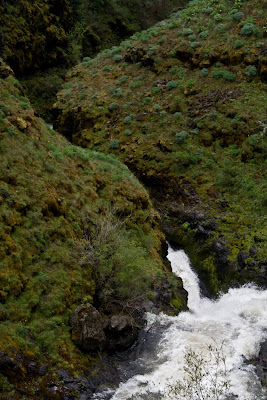 Talk about a cool mini gorge... The North West is beautiful. One more good slide and the money is all spent. It turns back into a manky and wood infested run once again. After we did all this and had a great level out there we came home and found out that there was another/better gorge upstream!!!!! With a big that was still yet to be run!!!! We had to go back!!!

All Photos by Erik Boomer

Well while these photos are a little bit old at this point, but i think they may still be as cool as a boner in sweatpants. But it all started back in late march as Tyler and myself (IG) left MT headed out for some paddling.  On the way we stopped by Palouse Falls for a scout of the bohemith.  And well with about 4500 cfs we were thinking that shit this thing really is runnable and began to think about it.   A little bit. 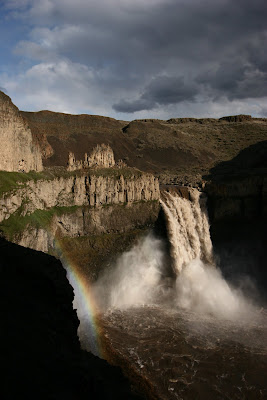 Arriving to Hood River and shacking up in the Beaver Lodge we decided well lets get the shit show started.  Grabbing Boomer we made our way down to Eagle Creek and gav'r hell on Metlako.  Sweet lines one and two.

We were a little scared! 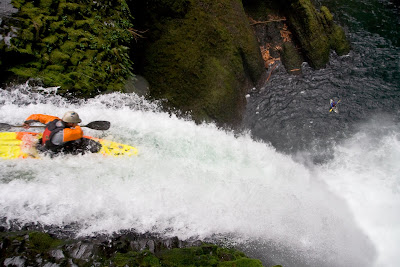 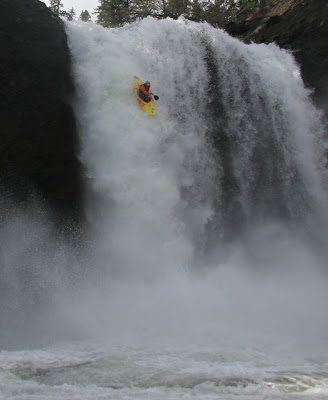 Deciding one thing was enough we called it a day and made it down to Rock Cr.  For some lines off Money Drop. 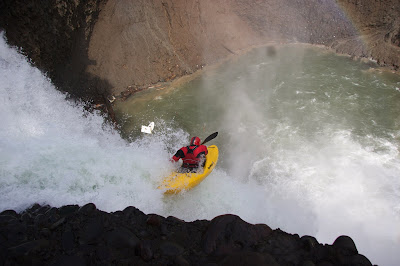 Craziest thing was before any of us even got a chance to run the drop Boomers, 120 lb rot willer decided to give it a go and was swept off the fall and stuck the 45 fter with out a second glance. 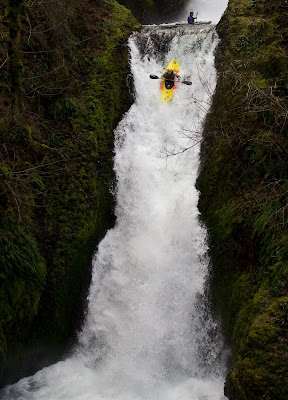 Next day was Bridal Veil, Tyler decided to give'r some hell on the upper drop and stuck the line that has only been attempted once before.  Then the both of us plopped down the lower slide and jumped out to see the boys waiting and finally excited to get to paddle more than just two freefalling drops. 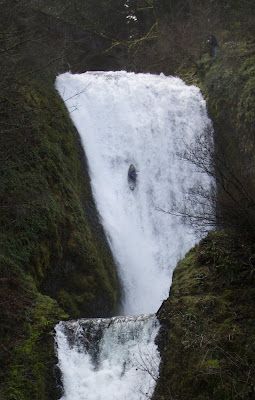 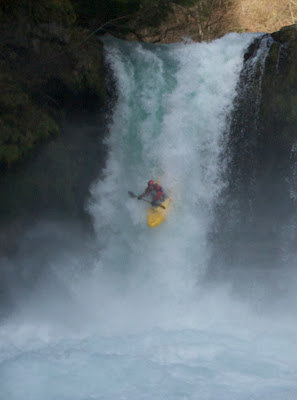 Boomer back in his realm on our one river run of the week, LW 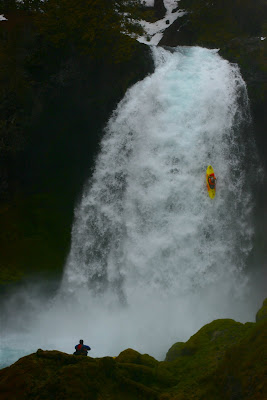 Next day we hopped in the car and made our way south, crashed in Eugene with Capo and headed up the McKenzie, to find tons of snow but perfect levels on Sahalie.  I went first and Tyler second, both of us plugging the hell out of it and proving it is deep. 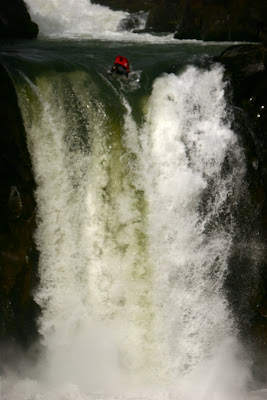 With a full circle we made our way around to Celestial Falls and saw the potential.  Rush drove 14 hours to make it and on his first attempt sticks the Hail Mary, OFY 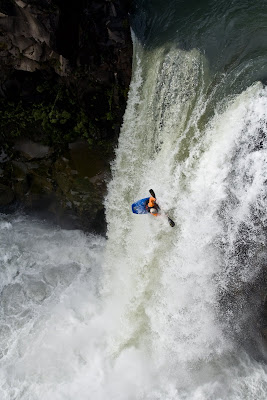 I decided for a freewheel, and just afterwards the rangers showed up and kicked us out with lifetime bans from the park. 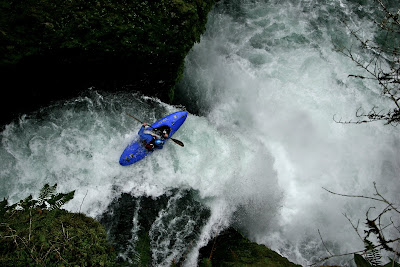 Another trip up Eagle Cr.  Led to another three new comers off Metlako, and one soaring dan west who decided to jump off the falls, putting it into perspective. 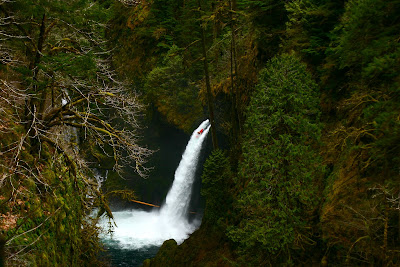 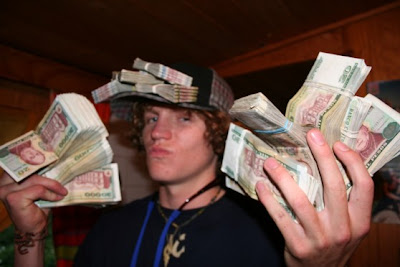 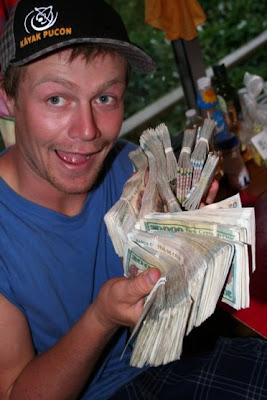 It was one wild week out on the west coast and was really the warm up for what was to come three weeks later as Tyler decided to rout the ultimate stout going for Palouse and it 186 FEET!!!!!
Posted by E.G. at 8:07 AM 4 comments: